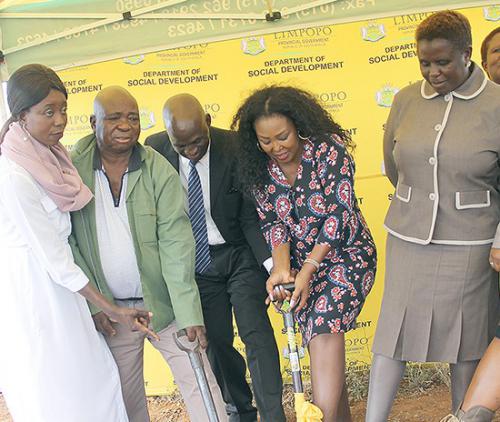 Residents of Sinthumule/Kutama and adjacent areas received a long-awaited gift last Tuesday when the Department of Social Development has injected R25 million to construct a new modern office at the Tshilwavhusiku Health Centre.

Most of the people in the area were forced to travel to Louis Trichardt to get such services.

Members of the community expressed their happiness when the MEC for Social Development, Ms Mapula Mokaba Phukwana, performed the sod-turning ceremony to officially start the construction of the project.

She said that she had listened to the grievances of the community members about the rendering of services within her department. With the new facility, people in and around Sinthumule/Kutama can access services conveniently, she added.

According to her, she had taken the decision that nobody would ever walk long distances to get services, particularly people in the deep rural areas who were forced to spend more money on transport to the Louis Trichardt offices.

"We are overjoyed about the fact that our problem of travelling long distances to access government services will no longer be necessary. We are happy that the government has decided to address this problem," said Vhavenda Vho-Edward Ravhura. He added that it was difficult for unemployed community members to access to the office because of the long distances they had to travel to get services.