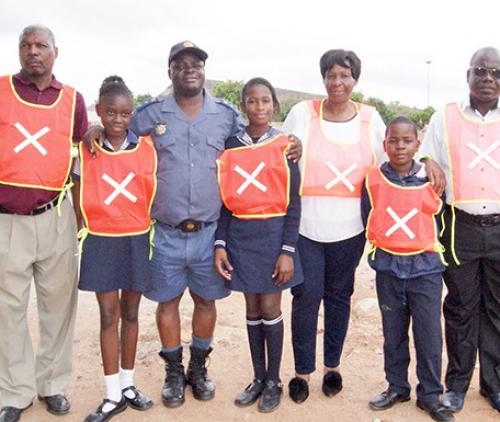 The increasing number of road accidents reported in the Musina municipality is a worrying factor for the local leadership, said the acting mayor of the Musina Municipality, Cllr Nkele Milanzi.

She was addressing school children, community stakeholders and invited guests during the Pedestrian Safety Awareness Campaign that was held next to the N1 freeway in Musina last Friday.

Milanzi said the campaign came at the right time when the Easter recess was nearing. “The statistics from our local police and traffic officials show us that accidents on our roads are increasing over time. That is why we deemed it fit to organize this event, which will play a meaningful role in saving the lives of our people. Although the accidents affect drivers, pedestrians and passengers, our focus here today is the pedestrians.”

She advised those who drink alcohol to refrain from using the roads when under the influence. “Most of our roads here in Musina have pedestrian walkways and we advise you to use them. It is also advisable to buy alcohol and drink at home instead of moving up and down after drinking. Drinking at home minimizes the chances of your being knocked over by vehicles.”

Milanzi further advised learners always to observe the rules of the road. “Children are the future leaders of this country and we want them to live long, so that they can help in developing our country. Make sure you cross the road only when it is safe to do so. If you are reluctant, always ask an adult to assist you, so that you can cross the road safely.”

She concluded by applauding the good work performed by traffic officials and other stakeholders in making sure that the roads are always safe.