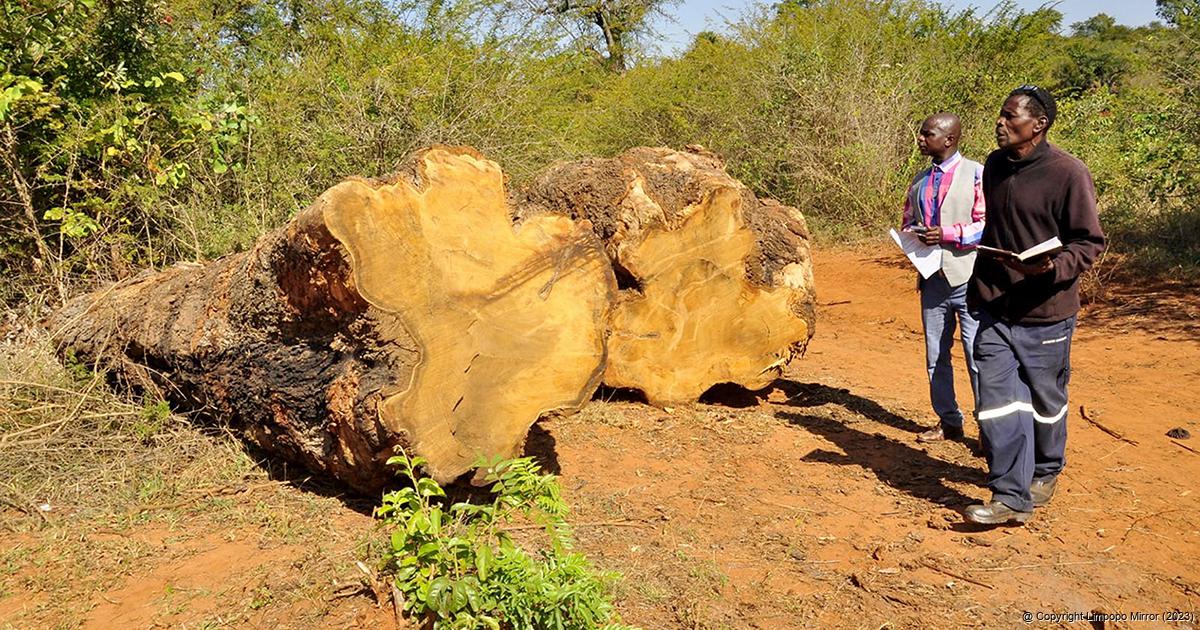 The illegal cutting of the African Teak tree has become a matter of great concern for the community of Tshidzini. Here, community leaders Mr David Ramanaga (in black) and Mr Robert Magara inspect the logs that were left in the bush by the thieves. Photo: Elmon Tshikhudo.

A meeting to discuss the illegal cutting of the highly prized and protected Mitulume trees (Wild Oleander, or African Teak) at Tshidzini, outside Thohoyandou, ended in disarray and chaos when unruly members of the community caused havoc.

The meeting was also attended by officials from the national Department of Economic Development, Forestry and Fisheries, who conducted an awareness campaign on the different plant species, teaching the community about their importance and the acts that govern them.

Local Thulamela Ward 9 councillor Mpho Matshavha reported on progress made on the different projects being undertaken in the village. The item that many were waiting to hear a report-back on, however, was the concerns raised by community members about the illegal cutting of the African Teak trees in the area.

When the time came to deliberate on this issue, three members of the community, who were allegedly intoxicated, started hurling insults at community leaders, using vulgar words. The unruly elements are alleged to be a rented mob aligned with those who are benefitting from the illegal sale of the tree, who made sure the issue was not discussed.

For a moment, chaos reigned, with the three troublemakers (two women and a man who is apparently not even a local villager) threatening everyone at the meeting. The cool-headed leadership of the village averted what could have escalated into a physical fight. The man apparently also threatened to shoot some of the leaders. The angry community dispersed one by one and the issue of the trees was never deliberated on.

Community leader Mr Robert Magara said they were very disappointed with the whole fiasco. “We have a serious problem here where there is massive looting of the protected African Teak tree. A few weeks ago, we stopped a truck full of big logs of the tree in the local bushes. On questioning the drivers of the truck and the excavator that was being used to load the trees, we were surprised to learn that certain leaders were part of this syndicate that was illegally cutting the trees. The matter was reported to the environment officials, who took the culprits to the police, where they were given a spot fine of only R2 500,” he said.

Magara said the community members were very angry that such a small fine was imposed on the culprits, who also took away the consignment of illegal trees, leaving only a little of their loot behind.

Mr David Ramanaga, who was herding cattle in the bushes, spotted the fully loaded truck and reported the matter to the local authorities. He said that he was not happy about the way the issue was handled. “We were to discuss the issue as a community, and these people came to disrupt our meeting. We won’t rest until this issue is well ventilated, and their threats will not deter us. We cannot watch as our heritage is being destroyed. These are very important trees, and we will take the matter to the highest level. We would like to see those disrespectful individuals called to order,” he said.

A follow-up meeting on the matter is being planned, but no date has been set yet.