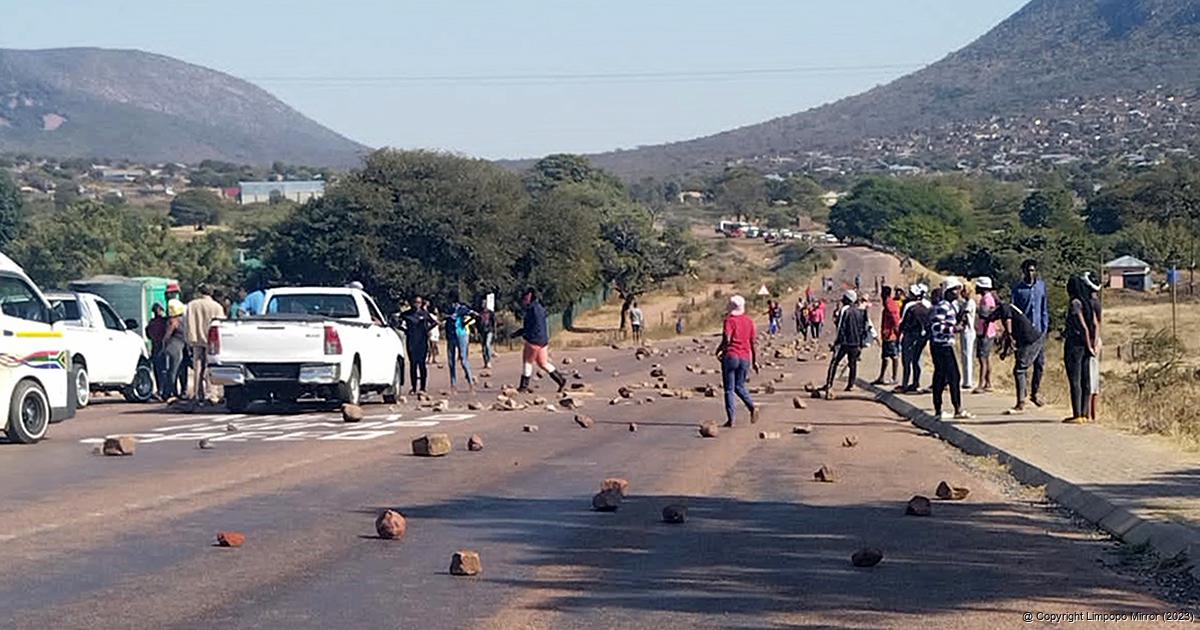 Residents from Tshikuwi closed the D523 road from 14 to 19 July, demanding the resignation of Makhado Municipality's ward 21 councillor, Mbulaheni Magada, whom they accuse of being corrupt. Photo supplied.

The tension between frustrated community members and their elected political representatives has escalated into violence in the Tshikuwi area. Residents have seemingly turned on their councillor, vandalising his house and car the past weekend. They have also vowed to continue blocking access roads to the area.

Residents went on the rampage on Thursday, 14 July, and closed the D523 road with rocks, demanding that the Makhado Municipality’s leadership come and address them about what they described as a corrupt councillor. They insisted that the ward councillor should resign. On Sunday night, some of the angry protesters also went to the councillor’s home, where they broke windows of his five-room house and the windows of his vehicle.

The group of residents accuse Makhado Municipality’s Ward 21 councillor, Mbulaheni Magada, of being corrupt and abusing his position for the last decade. They say he has failed to act as a true leader, calling him “disloyal and untrustworthy” and “not committed to dealing with the concerns of the community”. They also allege that he hires friends and relatives when job opportunities arise.

The secretary of the Vhembe Concerned Group, Mr Phathutshedzo Ramabulana, said that residents had had enough of councillors who used their leadership positions to achieve personal gain. “The process of hiring people for the jobs here was not done in a transparent way. Magada has been practising nepotism from the beginning, appointing supporters, friends and relatives, and it is not a good thing. We are passing a motion of no confidence against him because he is irresponsible. He holds no respect for the people who voted him in,” said Ramabulana.

Ramabulana said that his organisation, however, did not condone the vandalising of property and they distanced themselves from the people who had broken windows at Magada’s home.

Cllr Magada firmly denied all the allegations against him. He explained that a ballot system was used when selecting applicants for local job opportunities. Magada explained that he used a process where an applicant picked a piece of paper from a box, marked either “Yes” or “No”. If the person picked a “Yes”, he or she was in line to be hired.

Magada said he was surprised to learn that the same people who had voted for him as the ward councillor, now wanted him to resign. He blamed the local ANC Youth League and the branch’s leadership for “inciting residents” against him. He said everything formed part of a planned campaign against him.

The mayor of Makhado Municipality, Cllr Samuel Munyai, confirmed that the municipality had received the residents’ grievances but refrained from responding, for now.

Limpopo police spokesperson Brig Motlafela Mojapelo said they had opened a case of malicious damage to property and that one person had been arrested so far. The case is still being investigated.

A meeting with the Makhado mayor was scheduled for Wednesday, 20 July to discuss the grievances. From what was reported, the meeting did not end well and the aggrieved residents vowed to continue with their protest action and block access roads to the area.