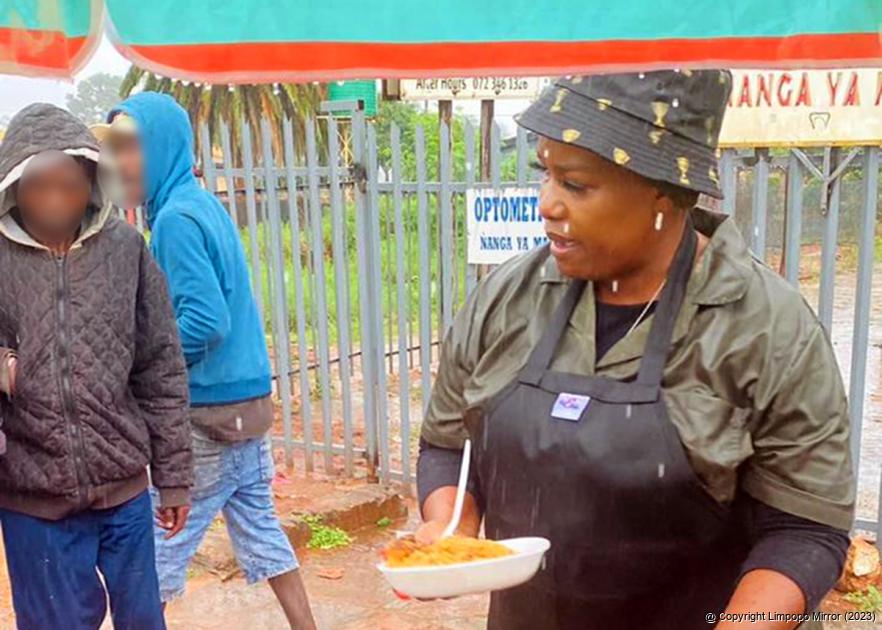 'Mommy' Manngo is the new heroine for Thohoyandou's homeless addicts

Muthu ha latiwi akhadi tshila nido muthoga linwe la maduvha - You don’t turn your back on people in need, because one day you might be the one who needs those same people’s help.

This is what Fhulu “Mommy” Manngo believes, and with this point of view she has become a beacon of hope for many young people who roam the streets of Thohoyandou.

Like only a mother can, Manngo heard the cry for help emanating from the deepest shadows of the town where despair comes in so many forms, and she could not turn away. Not only the old or seemingly destitute “hobos” line the pavements for shade and shelter and a few coins for a half-loaf of bread anymore. They now compete with the fast-increasing number of young people who get ensnared by hard drugs, like heroin and the disturbingly affordable (and therefore highly addictive) drug called ‘Cat’, which strips its victims not only of their material possessions but also of their families, friends, their dignity, and ultimately the ability to earn an honest income. These unfortunates are known as the “addict-hobos”.

The big-hearted businesswoman from Thohoyandou came to an important decision: not to ignore these people, but to provide them with food to eat and a lot of love and compassion, so she started a feeding scheme. Manngo firmly believes that, with the right approach, some hope might still be left for many of them. “We have to stop judging them and show them love. What they (drug addicts) are going through is not easy. It is very hard for them to quit. The main aim here is to win them back into our communities,” and come rain or shine, she makes sure that they get fed.

Manngo cooks for them every Sunday, but often also takes food for them from her day-care centre. The feeding scheme is already confirming that an enormous need exists within this homeless community. “When I started the feeding scheme a month ago, I fed around 40 homeless people. Two Sundays ago (12 June), I fed over a hundred people. The number is fast growing. It is clear that we have a problem on our hands. How many more young people will end up becoming hobos? I wish other people would join me and help me fight this enemy that is destroying our youth.”

Naturally, this initiative comes with many different challenges. “We can’t force them to go to rehab, but we can love them until they are ready for rehabilitation. Some of them feel they are ready and constantly ask me if I have found a place for them to get rehabilitated. I know I cannot feed all of them, but I can try to put a smile on a few faces,” she said.

When asked why she had started with the feeding scheme, Manngo replied, “I like to help people who are in situations that I have gone through. I once lived on the streets with my two-year-old baby. I didn’t do drugs, but I was homeless and eating from dustbins. I had a family and a home, but I was too ashamed to go home. I was also helped by someone I didn’t know.”