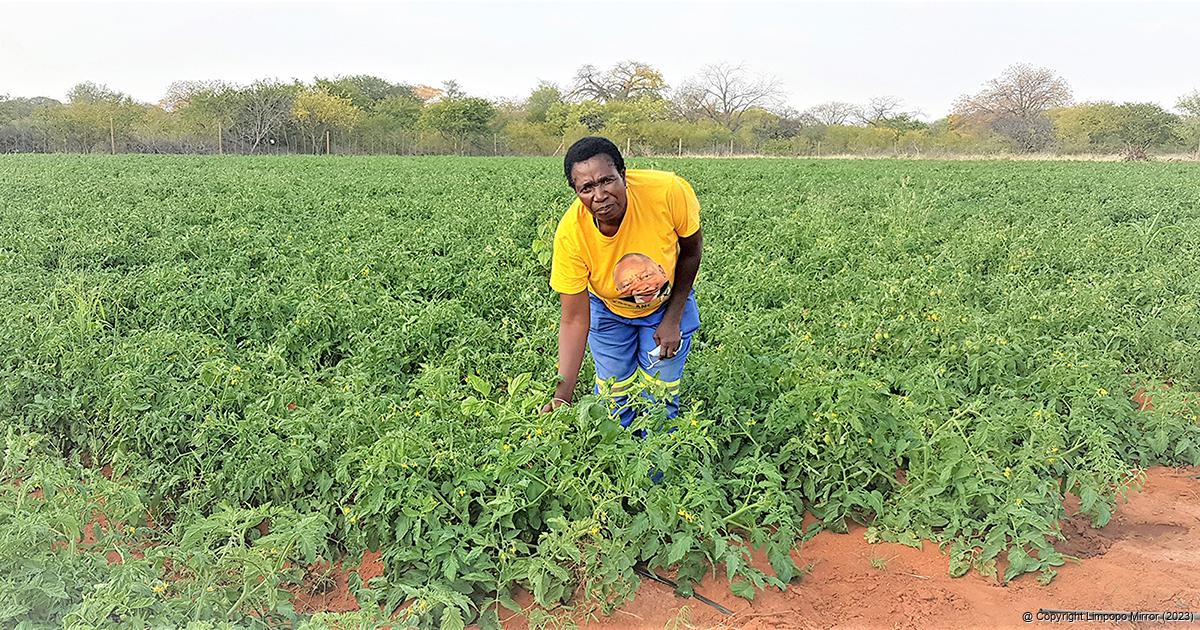 Florah Ndadza in the tomato plantation on her farm. Photo supplied.

When some of Florah Ndadza’s neighbours complained to the authorities about the stench emanating from the pigsty at her home, nobody guessed that this would only open the doors wider for her farming dream.

Ndadza, a resident from Campbell in Musina, is a successful female farmer and a true example of how South African women can stand independently in fighting hunger, starvation, and unemployment. Her days of being poor and unemployed are over as she has become her own boss through her farming project, which she started from scratch 10 years ago. These days, she is recognised as a respected farming entrepreneur who supports the local people economically. Ndadza has become a role model to young female farmers who aspire to follow in her footsteps.

She recalls how it started: “I kept a few pigs and chicken at home, and some of my neighbours reported to the municipality that they were not comfortable about the smell. Officials from the municipality came and told to me that they were going to move me away from the residential area, so that I can start my farming on a piece of land. To me, that was a blessing in disguise because I desperately wanted some land to work on. Everything was completed, and I signed the documents to lease the land from the municipality.”

Ndadza’s handful of pigs quickly multiplied. “I then started selling the pigs and bought some goats and cattle. As things turned better, I also expanded into crop farming.”

She now has more than 200 pigs, 48 cattle, 87 goats and a lot of poultry. She also has a section on her farm where she plants tomatoes and vegetables, which she sells to local communities, chain stores and factories. Her farming business has provided employment to 11 unemployed people.

Despite all her successes, Ndadza admits that farming comes with its own challenges. “This field needs someone who is dedicated and who does not give up easily. Crops sometimes get destroyed by hailstorms, but you must rise again and work hard. The price of pesticides is very high, and sometimes the profit is lower than what you expected.”

She said she used to spend a lot of money on hiring tractors to plough her land and trucks to deliver her products to the customers. “The cost was too high, and I decided to save some money by buying my own. Today I have two tractors, a truck and a light delivery van. I came to realise that to achieve what you have set for yourself is possible, as long as you are dedicated and have realistic goals.”

She encourages other women to stand up and create their own jobs. “It is upon us to pave ways for our own success. With the global economy sinking, South Africa needs women who can produce food to fight poverty and unemployment.”