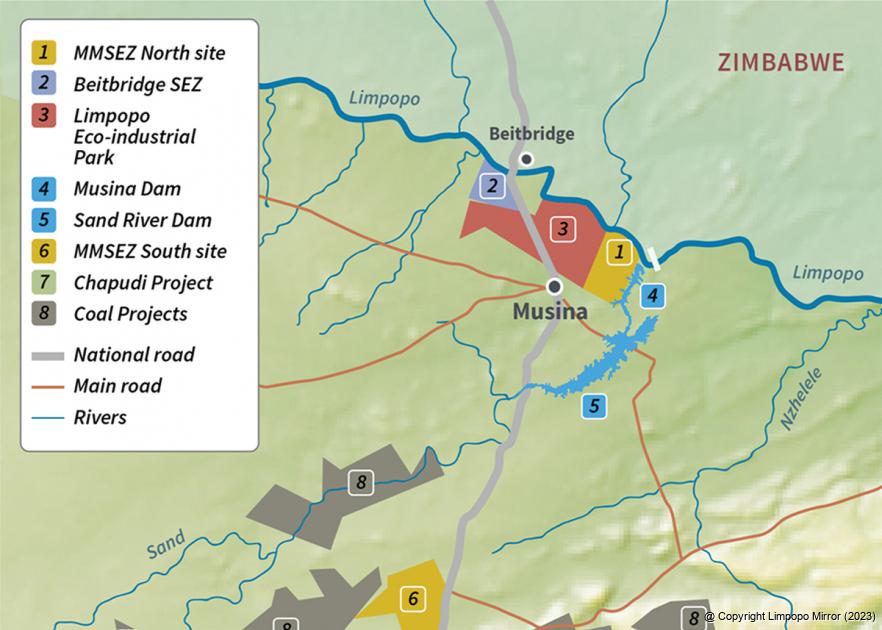 A map of the proposed Musina and Sand River Dams and their locations relative to the proposed Musina Makhado Special Economic Zone (MMSEZ). Upon completion of the dams in an estimated ten years or more from now, the dams are to supply 90% of the water needed by industries within the proposed MMSEZ. Last week the Minister of Water and Sanitation, Senzo Mchunu, however, stated that the dams form part of a long-term solution to augments Musina’s chronic water shortages, which begged the question who will eventually benefit from it?

Water plan for who?

Following the recent violent protests in Musina about the lack of water and the poor service delivery from the Vhembe District Municipality, the Minister of Water and Sanitation, Senzo Mchunu, announced ambitious plans to augment this border town’s water supply last week. Some of these plans, however, are long-term plans, and whether residents will be able to wait that long to get water remains to be seen.

The department admits that the current status of water provision in Musina and surrounding areas is critical because of underinvestment in water infrastructure and the lack of proper operation and maintenance. “The town relies primarily on groundwater, and it also experiences water rationing imposed by the Vhembe District Municipality because the current demand exceeds the supply, and also because of high levels of water leaks due to ageing infrastructure in both the bulk-supply lines and internal reticulation networks,” said the DWS.

Last week’s announcement follows discussions between Mchunu and his deputy ministers, David Mahlobo and Dikeledi Magadzi, with officials from the Limpopo Department of Water and Sanitation. The short- and long-term plans to augment the water supply in Musina include developing local water resources, including:

* Taking groundwater from the Limpopo River and other sources, wastewater reuse, and water from defunct mines;

* Transfer of water from Zimbabwe;

* Construction of a dam in the Mutale River for use in the Luvuvhu-Letaba catchment area with transfer of water to Musina, a long-term project to be completed by 2035; and

* Abstracting water from the Limpopo River and storing it in two dams (the Musina Dam and the Sand River Dam, which are still to be constructed), coupled with distribution infrastructure to Musina. This is another long-term project to be completed by 2035.

If some of these plans seem familiar, you would be right as they are identical to some of the plans submitted by the government to supply the controversial Musina-Makhado Special Economic Zone (MMSEZ) with water. The issue of the availability of water in a water-scarce region of the country to supply a major industrial project such as the MMSEZ has been a contentious one from the start.

The “similar” plans include transferring water from Zimbabwe, abstracting water directly from the Limpopo River and the building of the Musina and Sand River Dam.

Regarding the building of the two dams, the MMSEZ’s own environmental impact assessment indicates that building these dams will take at least 10 years. But even if they are completed, these two dams are destined to supply 90% of the water needed for the MMSEZ’s minerals complex, which includes various steel industries. This begs the question: For whom is the water then – for big industry, or the people?

As for abstracting water from the Limpopo River, this is sure to upset farmers on both the Zimbabwean and South African side of the border who use the river for irrigation purposes. No clear indication is given that any agreements regarding this between South Africa and Zimbabwe are in place, although Mchunu did state that Zimbabwe had indicated a willingness to share water with South Africa from their newly constructed Phase II Beitbridge Water Treatment Works, which has excess capacity. “I am, however, concerned about the never-ending discussions that are going on. I therefore appeal to officials involved to finalise the agreement. The feasibility and design stages will take approximately 18 months and the construction should start by end 2024 or early 2025, so that water can be delivered by end 2025,” said Mchunu. He added that the short-term plans must be implemented immediately to meet known demand requirements for Musina and its surrounding areas. The increased supply is expected to be approximately 25 million m³ per year.

Speculation is already rife that the government’s response to the “unrest” in Musina seems to be a convenient way to introduce plans that have already been drafted - presented as securing a water supply for the people, not the MMSEZ. “Funny that they don't mention the MMSEZ. My interpretation is that DWS is now moving on these plans,” remarked one observer.

Mr Johan Fourie, chairman of Save our Limpopo Valley Environment (SOLVE), also questioned the water-solution plans announced by Minister Mchunu. He is of the opinion that the real reasons for the plans are not being honestly communicated to the public. He said that chances were very good that the bulk of the water from these plans would be for the use of the MMSEZ and related industries and mines. “This will result in the MMSEZ having water, but not the people. I know from experience that government will always see to it that mines and industry have water, but not the people, even if it is a basic human right. Nobody knows how a plan that will take more than 10 years to realise will solve the current water problems in Musina,” said Fourie. He added that several Zimbabwean farmers had already indicated that they would oppose any attempt by the government to take away their right to irrigate from the Limpopo.

In the meantime, the VDM stated last week that the water supply to the border town was being done on a rotational basis. Extension 9, 10, 14, Campbell, Happer and Matswale will be getting water from 09:00 until 15:00, while Musina Town, Nancefield, Sikombe, Rwanda and Blikkiesdorp will get water from 15:00 until 20:00. From 20:00 until 03:00, water will be pumped directly into the reservoirs and then again to Musina Town, Nancefield, Sikombe, Rwanda and Blikkiesdorp from 03:00 until 09:00.

“Currently, ten boreholes have been drilled and the processes of installing equipment have also started, while energising will follow as soon as possible. The drilling of new boreholes is meant to replace 12 boreholes that were flooded by the river and also to augment water supply in the area,” says the VDM in the statement. They request Musina residents to be patient while the processes of restoring the water supply in the area are taking place.