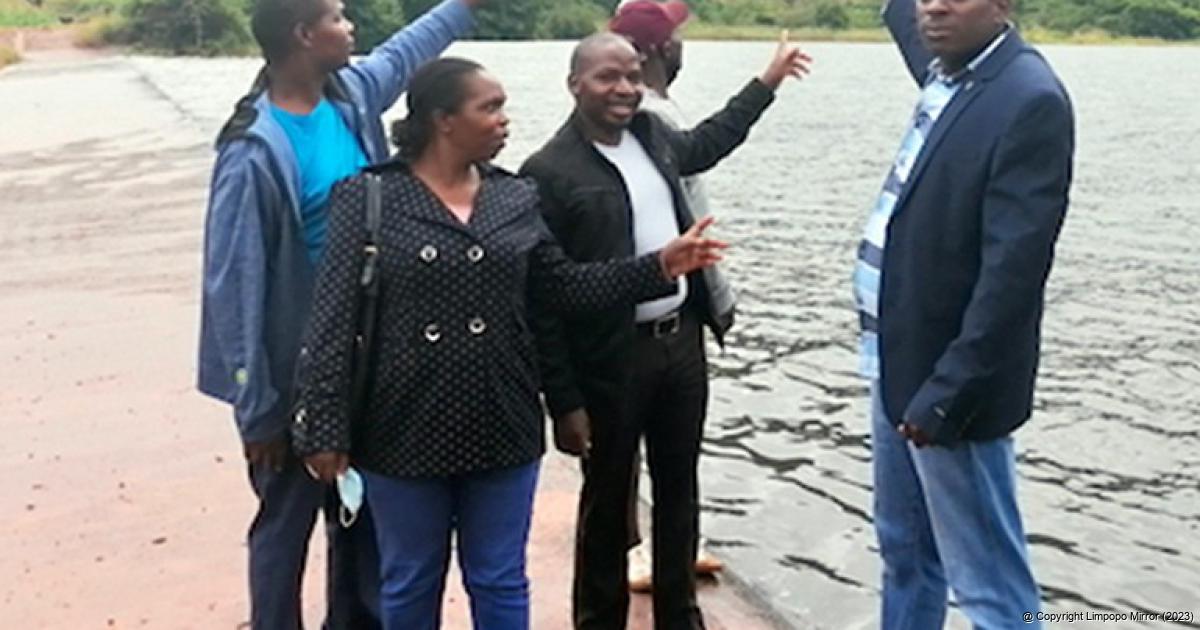 Community members who had hoped the Tshakhuma tourism development project would bring jobs and business point to where a conference centre and heritage site were supposed to be located at the Tshakhuma Dam. From left to right: Glen Raphulu, ​​Mulatedzi Nemutavhani, Joel Mulaudzi, Lesley Singo, Osily Rofhiwa Nyamande. Photo: Bernard Chiguvare.

R9.3 million spent but still nothing to show for it

Proposed in 2010, the R28.5 million Tshakhuma Conference Development Heritage and Tourism Project near Thohoyandou in Limpopo was meant to create jobs and bring tourism to the area. A conference centre and 20 camping chalets were planned. Instead, the Department of Tourism paid a service provider R9.3-million before the project ground to a halt in 2014 with very little to show for the expenditure.

According to Lesley Singo, who worked for nine months on the project, a site office was constructed, the area was cleared of bushes, and a small makeshift footbridge was built.

Asked what work had been done to warrant a payment of R9.3 million, the department told GroundUp it was for site clearance, purchase of a bakkie, a fridge and bags of cement, and the payment of a planning consultant and the training of workers.

GroundUp visited the site on 9 April. Thick bush has grown back over the area that had been cleared and a maize field now stands where the site office once stood.

The land at Goedverwachting farm near Tshakhuma Dam had been allocated by the Traditional Council to the Department of Tourism for the project.

Been Around GP Advert and Consulting CC (BAGP) was appointed as the service provider. The company, however, failed to comply with the contract stipulations, mismanaged the project funds, and a criminal case was opened against the service provider, according to Seapei Lebele, Tourism Acting Chief Director at the national Department of Tourism.

Efforts to contact or get comments from BAGP were unsuccessful.

“The community is really waiting for this project,” said Joel Mulaudzi, a community leader. He said the development would create much-needed jobs and boost economic activity for local small businesses and vendors.

For a while, the project employed about 130 people from the community.

The Department of Tourism claims it met with the Tshakhuma Community Trust in 2014, informing the trust that the project was being discontinued, pending a criminal case against the service provider.

Lebele said the project was not going to be revived. The department had advised the trust to liaise with and seek approval from the Traditional Council to take over the project.

Chief Netshavhani Edson Ramadi from the trust, speaking through an interpreter, said he had informed the community of the developments in 2014. He said he hoped the project would be revived to help reduce youth unemployment.

He said he would welcome anyone willing to take over the project and contribute to the development of the community.

But Osliy Nyamande, a community leader, said the community had had no feedback since 2014 from the trust or the department. “If the department feels the project has been stopped forever, it must give us permission to get people who can take over the project,” said Nyamande.

Meanwhile, Singo and other former workers wait, hoping that someone will someday resume the development.

The Department of Tourism said the matter was reported to the Assets Forfeiture Unit and South African Police Services at Sunnyside Police Station in 2011 already, who referred it to the National Director of Prosecutions.