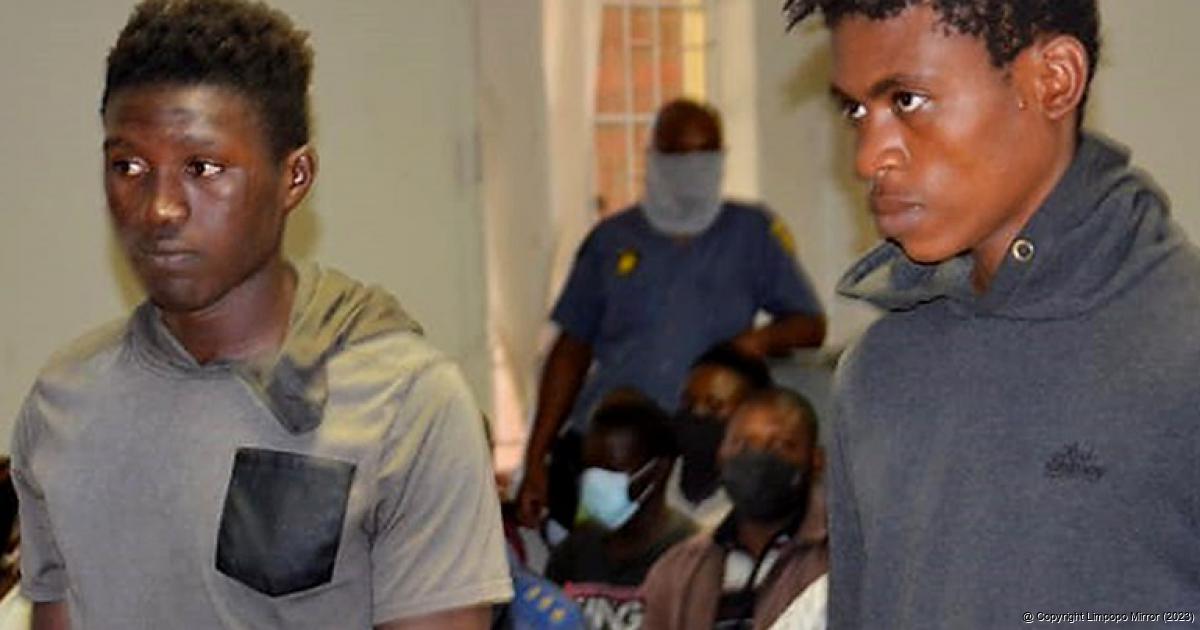 The two accused in the brutal murder of the 71-year-old Louis Cloete and his 65-year-old wife Ina from Levubu. Left is Mukhethwa Goodman Magoma and right is Engetelo Advice Sambo. The two appeared in the Vuwani Magistrate’s Court on Monday. Photo: Elmon Tshikhudo.

Within 24 hours of the brutal murder of the 71-year-old Louis Cloete and his 65-year-old wife Ina from Levubu last week, two young men from Hasani village near Malamulele found themselves in police custody for the violent crime.

The Cloete couple were allegedly accosted by suspects inside their farmhouse last Wednesday afternoon, 20 April. Their farmhouse was ransacked, with their attackers taking several items, including firearms, and loading these into the couple’s bakkie. The attackers then set the farmhouse on fire.

Smoke from the fire attracted the attention of a member of the Levubu Farm Watch, who rushed to the scene to investigate. Upon reaching the farm, he found the farmhouse completely engulfed in flames. He then spotted two suspects sitting in the Cloete couple’s bakkie, but when he approached them, the suspects jumped out and fled on foot, leaving behind the stolen items, as well as firearms, in the vehicle.

The farm-watch member immediately alerted the authorities, while other members of the farming community rushed to the scene to help extinguish the burning inferno. Only after the fire, which had completely gutted the farmhouse, was put out were the bodies of the couple discovered. They were found tied up under a pile of rubble that had allegedly been placed on top of them. Their bodies were burnt beyond recognition. Whether the Cloetes were murdered before their home was set alight remains uncertain.

Following the gruesome incident, provincial police commissioner Lieutenant-General Thembi Hadebe ordered a 72-hour activation plan, and a massive manhunt ensued. The efforts by the police and members of the community assisting in the investigation soon paid dividends, and on Thursday, 21 April, less than 24 hours after the bodies of the couple were discovered, two men were arrested.

The two men, Mukhethwa Goodman Magoma and Engetelo Advice Sambo (both 19 years of age), remained in custody until their court appearance in the Vuwani Magistrate’s Court on Monday. Facing charges of, among others, murder, attempted murder, robbery and arson, their case was postponed until 11 May for further police investigation. Magoma and Sambo, both South African citizens, will remain in custody until that time.

Monday’s court proceedings were attended by members of the Levubu farming community, who picketed outside the courthouse to express their dismay with farm murders. In a press release issued by the TAU SA (Transvaal Agricultural Union of South Africa) after Magoma and Sambo’s court appearance, Mr Fanie Havinga, vice-chairman of the TAU SA North and chairman of the Soutpansberg District Agricultural Union, said that they were happy that the two would remain in custody until their next court appearance. Havinga said that they would definitely oppose any bail application brought to prevent Magoma and Sambo from being released.

Following the arrest of the two suspects, Hadebe commended the police and investigating officers on a job well done.