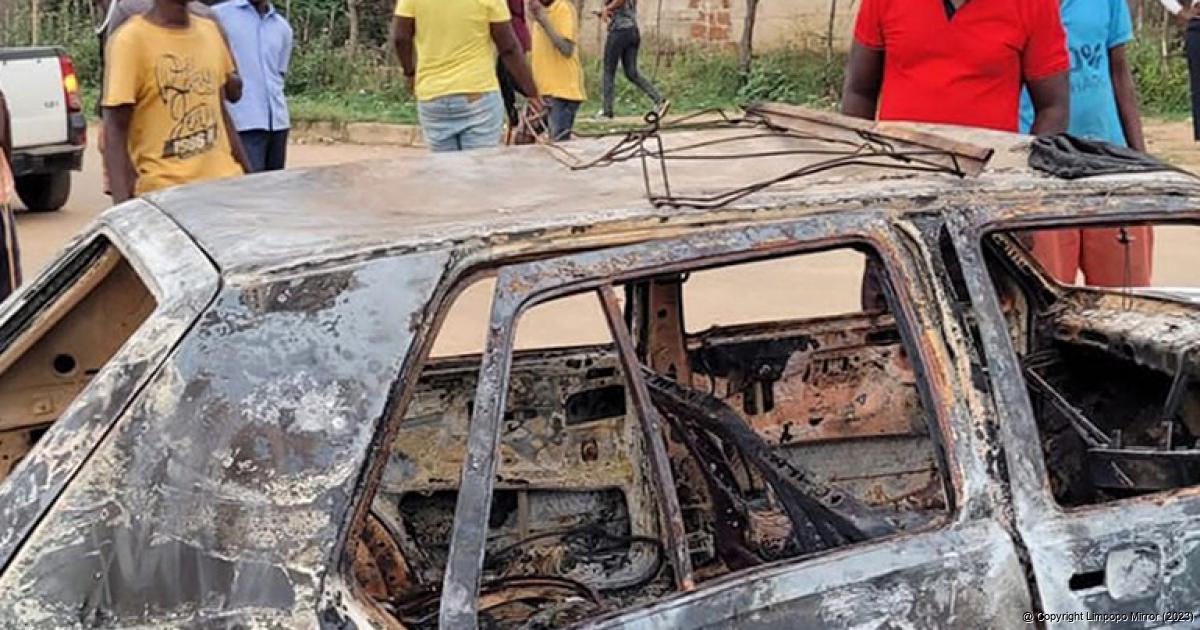 Community members at Hanesangani Mabangani look at the shell of the getaway car of three thieves that was set on fire by a mob. Photo: Elmon Tshikhudo.

The village of Hanesangani Mabangani, outside Vuwani, has become a nest for lawbreakers of late, with crimes such as cattle theft, robberies and housebreakings becoming the order of the day.

Overwhelmed by this ever-increasing lawlessness, residents decided to fight back against criminals themselves. Not long ago, thieves bit the dust when a bakkie full of stolen building materials was stopped in its tracks by disabled resident Mr Maxwell Muntswu. Realizing that they had nowhere to go, the thieves abandoned the bakkie with its contents and disappeared into the darkness. Now residents have once again thwarted three thieves in the act of stealing a TLB machine’s battery.

The mob confronted the thieves, who allegedly produced a firearm. The weapon, however, only seemed to infuriate the mob even more, so they started assaulting the men with whatever objects they could lay their hands on. The trio’s getaway car was also torched. Only the timely arrival of the police saved the three thieves from the angry mob. They are now recuperating in hospital under police guard.

Community leader Mr Alex Ndou said he had been called to the scene at around 06:30. “There was a heavy commotion going on, and I could not figure out what was happening, but I saw men who were being assaulted by a group of people. It is not surprising that the residents have decided to go to such extremes. They are angry and tired of the crime taking place in their village. Day in and day out there are reports of crime. Their cattle are being stolen and thugs breaking into their homes. Theft has become a major problem,” he said.

Mr Piet Nemudzivhadi, another community leader, said that criminals had chosen their area as an easy target. “The community is now calling it enough. It is not surprising to see mobs doing this as a way to protect themselves and fighting crime. As a community, we will soon have a meeting to find a better way of fighting crime in our village,” he said.

Limpopo police spokesperson Brig Motlafela Mojapelo confirmed the incident, saying that three men have been placed under police guard. “Cases of theft and pointing of firearms were opened against the three suspects. They will appear before the Vuwani Magistrate’s Court once they had recovered. No arrests have been made yet in the mob justice incident. We are appealing to anyone with information that can lead to the apprehension of the suspects to contact the Crime Stop number at 08600 10111 or the nearest police station. Our investigations are still continuing,” he said.