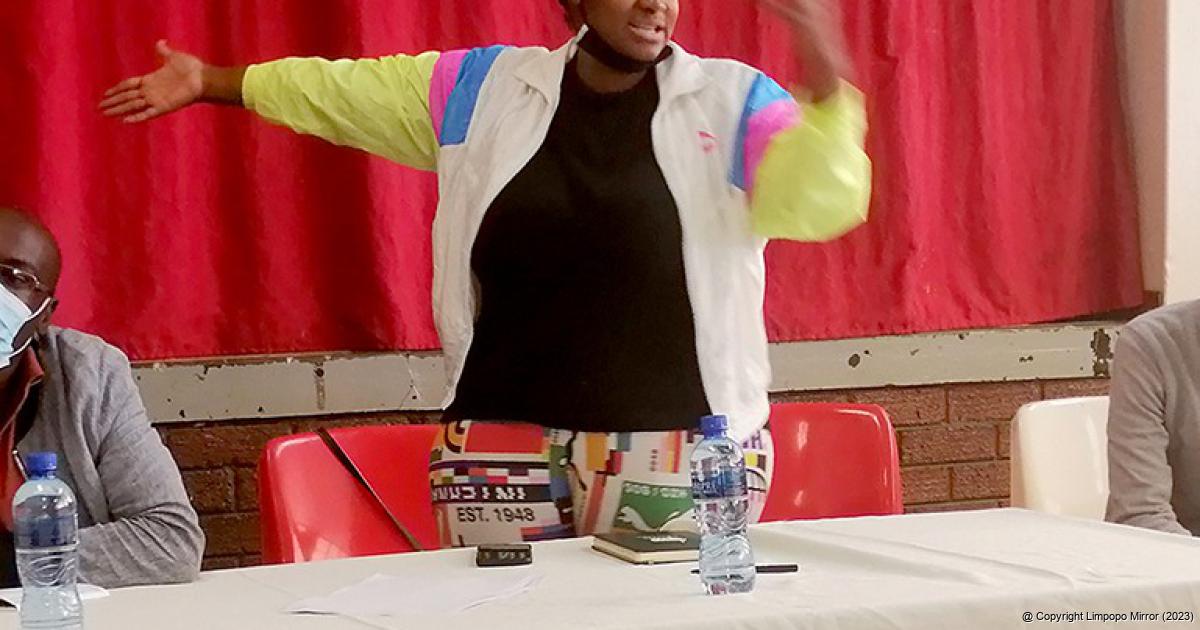 Standing, Cllr Gumani Mukwevho, the portfolio head for technical services at the Makhado Municipality addresses Eltivillas residents. On her right is Ward 9 councillor Kanukanu Maphubu and on her left is Eltivillas resident Mr Zameer Osman. Mukwevho was reponding to some of the residents' questions. Photo: Bernard Chiguvare.

Cllr Gumani Mukwevho, the portfolio head for technical services at the Makhado Municipality, promised Eltivillas residents that all current ongoing projects in their area would be completed within the next two months.

This was during a meeting held at the community hall in Eltivillas on Monday, 18 April. Mukwevho, in company of Ward 9 councillor Kanukanu Maphubu, engaged more than 50 Eltivillas residents.

The residents sought answers regarding several problems and felt that the municipality had failed to deliver services to the residents within a reasonable time. The road rehabilitation project from the N1 into Main Street was at the top of their list of concerns.

In February this year, the Limpopo Mirror reported on how businesses had to endure the inconvenience of losing business because of the slow progress of the construction work on Main Street. The project was initially scheduled to be completed by April this year but was extended to 30 June 2022.

One of the residents, Ms Adila Aboobaker, blamed the municipality for its poor planning around the project, which has caused untold suffering to some of the business owners.

Residents also complained about non-functioning streetlights, and the fact that no-one at the municipality’s call centre ever answered the phone or gave feedback on community queries. According to the residents, some of the operators at the call centre respond rudely to their calls.

The residents further complained about overgrown bushes they claim have been unmaintained for years, which they believe, only serve as hiding places for criminals.

Although the municipality is not responsible for water issues, residents also voiced their concerns about the intermittent water supply at Eltivillas. On this matter, Mukwevho promised to invite the Vhembe District Municipality (VDM) to one of their community meetings, so that the problem could be addressed.

The community did not hold back on their grievances, further accusing Cllr Maphubu of making empty promises about assisting them with service-delivery issues in their area while, according to the residents, nothing has been done by the councillor over the past two and a half years.

Mr Hitesh Dave, one of the concerned residents, likened the tendencies of the democratic government to the Apartheid regime. He claimed that both regimes had been making excuses over the years for not delivering services to Eltivillas. “We expected the new dispensation to deliver services to our expectations, but really nothing has changed. The municipality is only there to receive our money, but no services are rendered.” Dave challenged Mukwevho to inspect the municipal registers to see just how much revenue comes from Eltivillas residents.

Another resident, Mr Phumudzo Eugene Mbedzi, suggested that monitoring teams should be instituted on projects. He felt that, if this were implemented, contractors might actually do their work.

Responding to the issue of non-functioning streetlights, Mukwevho said that two of the three substations supplying electricity to Eltivillas were not working. The municipality is working towards servicing the substations as they need new transformers.

Mukwevho further promised to speak to the head of corporate services, so that call-centre operators respond to public issues immediately. She requested that the community appoint their own representatives with whom she will then engage fortnightly on service-delivery issues.