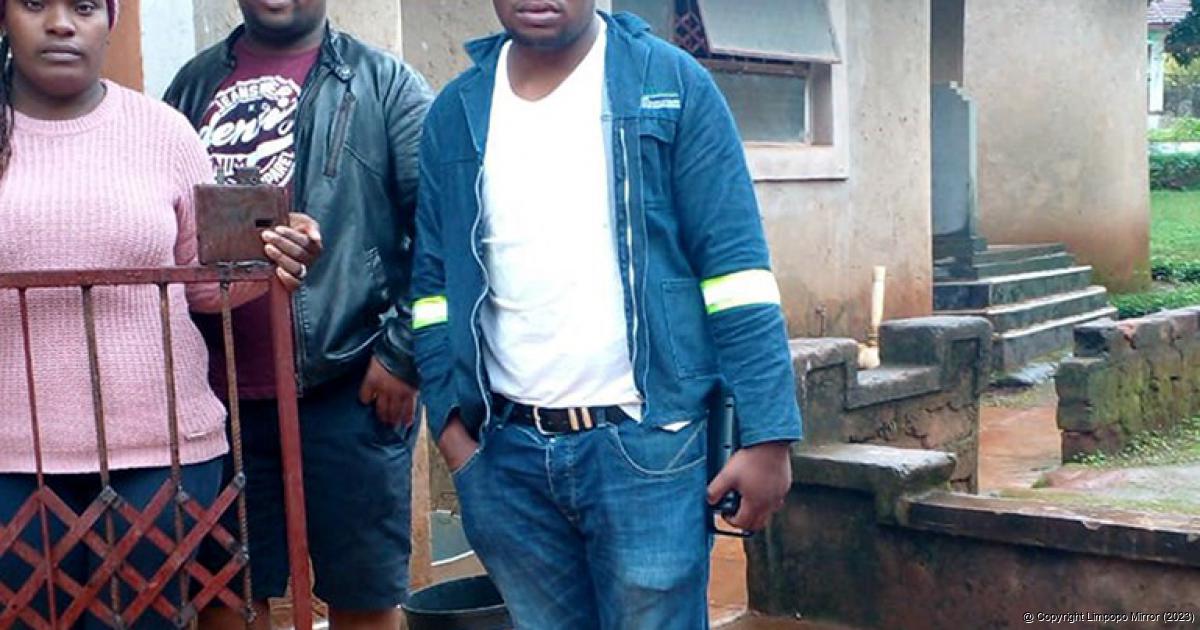 Ms Brenda Magogona (left) holds a piece of the broken burglar door at her parents' home after they were attacked. Next to her, on the right, are brothers Ndivhuho Magogona, Lufuno Magogona and Munna Ndi Nnyi Men's Forum chairperson Mr Bardwell Mufunwaini (far right). Photo: Elmon Tshikhudo.

Thursday, 14 April, was supposed to be a great day for the Magogona family of Phiphidi outside Thohoyandou, as Mr Phanuel Magogona (56), a government employee, was to receive his annual bonus. For this reason, the family was in good spirits.

Magogona and his wife, Norah (53), drove to the nearby town of Thohoyandou to draw some of the money to buy groceries in preparation for the Easter celebrations the following day. After the couple had finished with their shopping, they went back home and continued their day like every other day. Little did they know that the Angel of Death was lurking close by.

In the early hours of Easter Friday, 15 April, the couple were violently attacked in their home. Their daughter, Ms Brenda Magogona, told the media that the intruders had entered the house by breaking the burglar (security) gate by the kitchen door at the back. “My parents were asleep when they heard noises in the kitchen. On trying to find out what was happening, they came face to face with their attackers,” she said.

Norah was brutally killed in the attack, while Magogona was severely injured and subsequently rushed to the intensive care unit at the local hospital. Their 10-year-old grandson, Blessing, thankfully sustained only minor injuries, while six-year-old Gudani escaped unharmed.

No confirmation has been received about what the intruders had used as weapons, but a hand hoe that was found in the outside kitchen is believed to have been the murder weapon. A pick, which is also suspected to have been used, was also found in the house.

“They ransacked the whole house and also broke into one of the cars that was parked inside the garage,” Brenda said. She indicated that the intruders must have had prior knowledge that some cash was in the house. “My father got his annual work bonus on Thursday, and I suspect that he might have confided in someone very close to him, who later sold him out. The last time I saw my parents was the Thursday before the incident, in Thohoyandou. My mother told me she had R5 000 in her possession. They bought some groceries, which I think cost around R1 000. The robbers knew exactly what they were looking for. They took two cellphones and an undisclosed amount of cash,” she said.

“We are very heartbroken as a family. My parents are good people who helped others where possible, but when they screamed for help, no one came to help them. My mother was killed in the most brutal way, while my father is still fighting for his life. These thugs could have just taken what they wanted and left them alive. We feel very helpless, but the support we are getting is keeping us strong. We have left it all in the hands of God, and we hope the suspects are found and punished,” Brenda said.

Munna Ndi Nnyi Men's Forum’s chairperson, Mr Bardwell Mufunwaini, said that crime was becoming a major problem in Vhembe. “The organisation has been searching for real men since 2003, but it seems that they are difficult to find. Most of these crimes are perpetrated by men, and we say enough is enough. This has got to stop. We are appealing to government to fund our programmes, so that we can compensate volunteers and keep our villages safe by conducting patrols,” he said.

The local police confirmed that they have opened a murder and attempted-murder case. They appealed to anyone with information regarding the case that could assist the police in their investigation to contact Sgt Thabo Malapela at 060 852 8283 or Captain Rasilingwana Mawela at 082 414 7763.