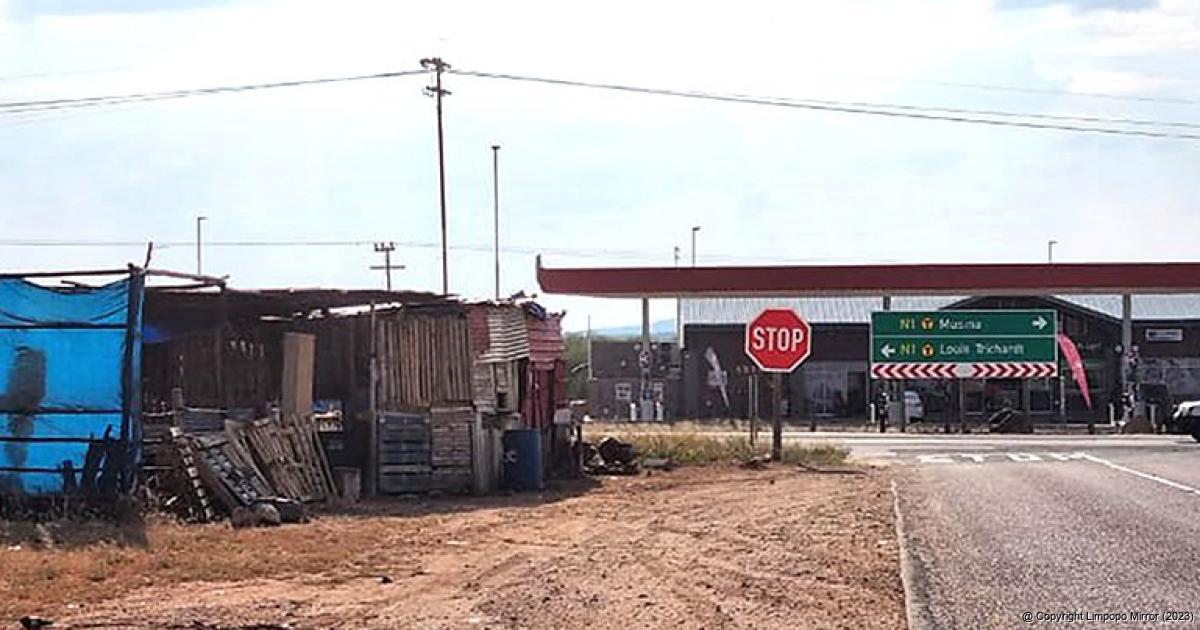 For the past two years now, motorists traveling on the N1 between Louis Trichardt and Musina in Limpopo have noticed the spaza shop inside the road reserve right where the R525 Tshipise road meets the N1 at Bokmakierie. The structure is illegal, but the owner openly defies SANRALs’ warning to break it down and remove the illegal structure from the road reserve. Photo supplied.

A spaza shop owner’s open refusal to break down and remove his illegal spaza shop next to the N1 at Mopane in Limpopo is once again testimony to the fact that, in a country with some of the best legislation in the world, the authorities are dropping the ball in terms of actually enforcing such legislation.

For the past two years now, motorists traveling on the N1 between Louis Trichardt and Musina in Limpopo have noticed the spaza shop, called Exodus Food, inside the road reserve right where the R525 Tshipise road meets the N1 at Bokmakierie. The Zoutpansberger first reported on this illegal structure in March 2020. At the time, SANRAL national spokesperson Mr Vusi Mona told the newspaper that for any person to erect such a structure in a road reserve was illegal. “It contravenes Sections 48 and 52 of the SANRAL Act of 1998. In some cases, it may also contravene local municipal by-laws,” said Mona at that time and promised to investigate the matter.

At the beginning of December 2021, the newspaper again asked the authorities why they were allowing the owner to continue with his illegal operations. This media enquiry, despite numerous follow-up request to respond, went unanswered for almost four months until SANRAL finally responded on Tuesday this week.

SANRAL’s operations and maintenance manager in the Northern Region, Mr Madoda Mthembu, reaffirmed that trading inside a national road reserve is illegal. He said that the person currently trading illegally inside the road reserve at the N1/R525 intersection had been issued a letter by SANRAL’s route manager on 25 January this year to move his illegal structure from the road reserve. The letter was served in terms of Section 48 and 52 and of the South African National Roads Agency Limited and Section 46 of the National Roads Act (Act 7 of 1998).

Section 52(1) of the South African National Roads Agency Limited Act states that no person may, without SANRAL’s written permission, trade or expose, offer or manufacture for sale any goods inside the road reserve boundaries of a national road or in the adjacent 60m building restriction area. Also in terms of Section 48 of the same act and the National Roads Act, no person may without permission erect, construct, lay or establish any structure or any other thing inside the road reserve boundaries of a national road or adjacent building restriction area. “It was reported to the South African National Roads Agency Limited that you are trading inside the road reserve without the written permission of the SANRAL. By contravening the Act you made yourself guilty of an offence and liable on conviction to a term of imprisonment and a fine,” the letter states. The letter goes on to give the spaza owner 14 days from receipt of the letter, which was hand-delivered to him, to cease trading and to remove his illegal structure. Failure to do so, SANRAL states in the letter, may result in their asking the South African Police Services to prosecute the owner.

But, said Mthembu, the owner refused and basically gave SANRAL the middle finger. More disturbing is what happened next. “He has been sending threatening messages to the route manager since he was issued the letter. This matter has been escalated to SANRAL’s land invasion unit to deal with it further,” said Mthembu.

Mthembu explained that SANRAL does not have a law-enforcement unit and therefore cannot use physical force to remove illegal hawkers from the road reserve. “Once we issue the letter in accordance with the SANRAL Act, we do not have any other recourse except going to court which, for the most part, takes a while to unfold. In some cases, SANRAL relies on local municipal by-laws which unfortunately do not always get enforced. This matter as stated above has been escalated to the SANRAL service providers dealing with Illegal Occupation and Land Invasion to pursue other options available, which might include the courts,” said Mthembu.

The defiant spaza shop owner might, however, see his illegal structure being removed sooner than he thinks. Mthembu said that a rehabilitation project was coming on the N1, either later in 2022 or early 2023, and the space occupied by the spaza owner’s illegal structure was part of the widening of the N1 under the coming project. Mthembu said this meant that before the project started, the spaza shop would be removed from the road reserve for construction to proceed.

The defiant spaza shop owner’s reluctance to adhere to legislation and SANRAL’s inability to act spells disaster in the long run. The problem of more and more roadside vendors’ using the road reserve to trade is constantly growing. Evidence of this can be seen on the N1 just south of Louis Trichardt. Initially, roadside vendors traded in the road reserve just south of the traffic circle at the N1/Elim-turnoff. In the past, these vendors were removed, but they merely returned. The past couple of weeks, more and more roadside vendors have started to erect illegal fruit and vegetable stalls along the N1 outside Louis Trichardt, all the way to the traffic circle at the Elim-turnoff. An example of just how nonchalant the authorities are to act against these illegal traders could be seen on Monday morning when provincial traffic officials shared the road reserve with the illegal traders to pull off motorists and check for traffic violations. Some might, however, say that people should leave these roadside vendors alone as they are just trying to make a living.