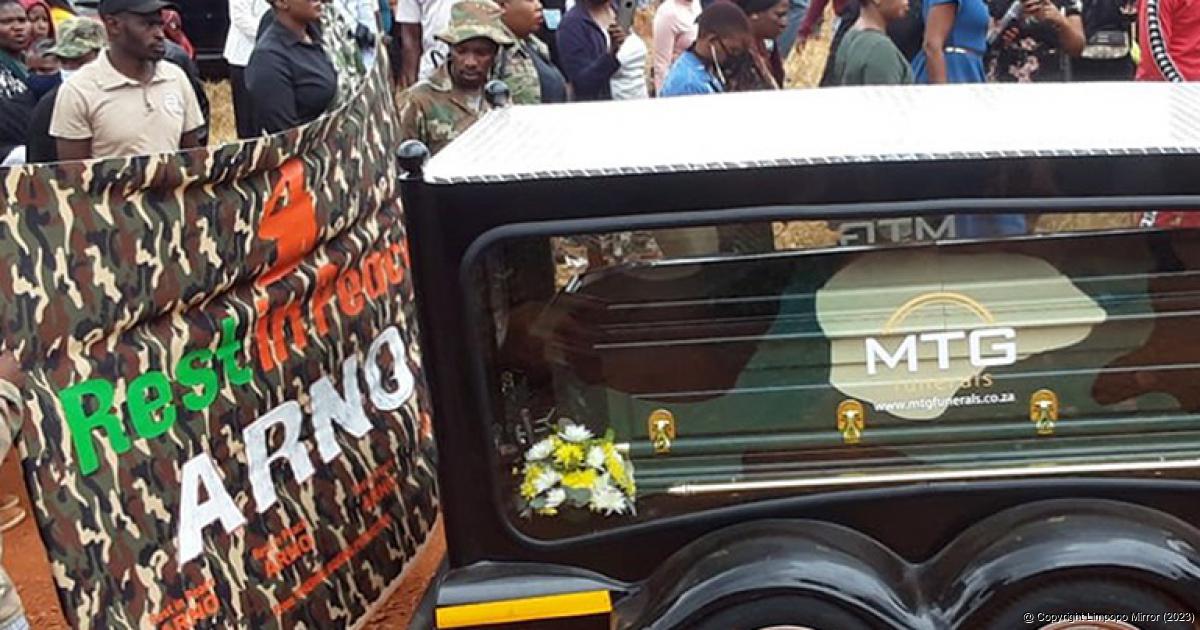 The hearse carrying the remains of the late Arnold "Soldier Lion" Mudau on its way to Tshakhuma Mibomoni Cemetery for burial. Photo: Elmon Tshikhudo.

Mourners remember the good side of Arnold Soldier Lion Mudau

Rarely before in the history of Vhembe has a funeral drawn thousands of mourners from around the country like it did during the funeral service of the late Arnold “Soldier Lion of Judah” Mudau, which was held at the Tshakhuma Sports Grounds on Saturday, 12 March.

The sports ground was packed with people from everywhere who came to pay their last respects and just be a part of it. Among the mourners were leaders from the business community, friends and relatives, representatives of Tshakhuma Tsha Madzivhandila FC, many students from Univen whom Mudau assisted, and the ANC Vhembe Region, who was represented by Cllr Samuel Munyai.

The convoy stretched for five kilometres from the late Mudau’s mansion at Dzananwa to the sports ground, where a large marquee tent was erected for the service and, just as Mudau would have liked it, most of the mourners stuck to the prescribed theme of camouflage or army uniform. His casket was covered in camouflage colours too. As the procession reached the Tshakhuma Market, mourners were treated to a few minutes of spine-chilling car spinning around the hearse.

Mudau, who was often alleged to be a crime kingpin, started the famous Jerusalem Restaurant and Pub, among other businesses. He died in a car accident on the R524 road, not far from his home, on the morning of 5 March.

During the funeral service, a different side to Mudau was revealed as speaker after speaker praised him for the good work he had done in the community. His sister, Ms Maggie Ramudzuli, told the mourners that she was saddened by all the bad things that had been said about her brother. “I was in a taxi from Thohoyandou one day and there was a woman who was telling lies and bad things about my brother. She did not even know who was in the taxi. What I want to tell you is that Arno was a very good person. He often assisted students with their registration fees, paying R5 000 for each student. I have been going through TikTok and no one posted that.”

She also remembered the time when Mudau built a five-room house in Vuwani for an old woman who lived in a cardboard house. “But these are just some of the good things that people don’t want to talk about when Arno’s name is mentioned,” she said.

Arno was later laid to rest at the local cemetery. His tombstone matched his stature, with a lion in camouflage colours erected next to it. The burial was also accompanied by a lot of gunfire.

The mournful atmosphere, however, turned carnival when the ever-popular Makhadzi arrived to pay tribute to the late Mudau. Her performance was delivered from the balcony at Mudau’s house, and all his followers danced the night away until the early hours of Sunday.