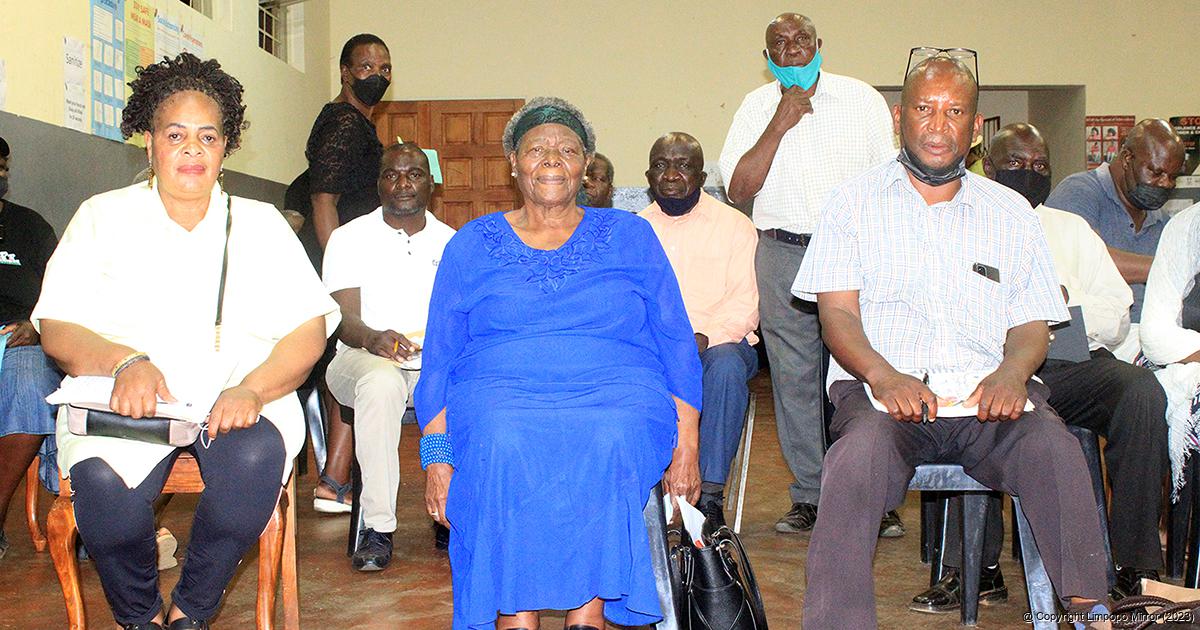 Seated in front are former employees of Elim Hospital, Molly Ameker (left), Dr Rachel Tlakula (centre) and the chairperson of the traditional council, Vicky Muvhali. Standing at the back (right, with blue mask) are Elim Mabobo, headman Nelson Mabobo and some residents. The photo was taken during a meeting to address the hospital's intention to move the ophthalmology department to another hospital. Photo: Thembi Siaga.

Rumours that the Department of Health is planning to move one of Elim Hospital’s key facilities to the Tshilidzini District Hospital have caused anger and uncertainty among residents and community leaders from Elim and the surrounding areas. Although the department has denied these allegations, residents do not seem convinced about their intentions.

Employees at Elim Hospital with inside information apparently informed former nurses and community leaders that the hospital’s ophthalmology department has not been included in the renovation plans at Elim Hospital. This news spread quickly, and the tribal office immediately summoned the hospital management to their office to discuss the hospital’s plans. A meeting was scheduled for 17:00 on Friday, 4 March, at Elim Hlanganani in Waterval.

Shortly before this meeting, however, the Department of Health issued a statement in which it assured residents that it had no intention of removing any services at Elim Hospital, but residents remained unconvinced and insisted that the meeting take place.

Elim Hospital is one of the oldest health facilities in Limpopo. The headman of Elim Mabobo village, Nelson Mabobo, explained that the issue was brought to their attention by concerned workers and members of the community. “We summoned the CLO and CEO of the hospital to the tribal office. They confirmed that members from the provincial and national Department of Health had showed them the new renovation plans for the hospital, which did not include an eye clinic,” he said.

“They told us that it was excluded from the renovation plans because it was more suitable for Tshilidzini District Hospital in Thohoyandou. So, we decided to write to the Department of Health to plead with to them to include the eye clinic,” he said.

A former employee at Elim Hospital, Dr Rachel Tlakula, said that she was concerned about the department’s plans to remove this facility. “It didn’t sit well with me and the community when we heard about their intentions,” she said. Dr Tlakula felt that the communities had not been consulted before the renovation plans for the hospital had been drawn. “Our communities should have been involved somehow and that worries us. We don’t trust the department’s claims that these are only rumours, because they might not know about it, but the whole community is aware of this issue,” she said.

Local resident Gift Mukhari also voiced his concerns around the new renovation plans. He said that no smoke existed without a fire somewhere, and he strongly believed that removing the eye clinic would leave residents lacking. “Residents from villages like Mashamba, Muwaweni, and many others will be forced to travel to Tshilidzini Hospital if this happens. This fight against the removal of the eye clinic is for the whole community,” he said.

Meanwhile, the chairperson of the traditional council, Vicky Muvhali, said that the council would arrange another meeting with the provincial and district management to resolve the problem. “The removal of the eye department is still only a rumour, as we never got to see these new plans. However, we are planning to call the management for a meeting again to get clarity on it,” he said.

Health MEC Dr Phophi Ramathuba denied the claims about the removal of the ophthalmology department. She assured them that the clinic would continue to serve them as it had always done. “We have recently procured ophthalmology equipment to strengthen eye-care services there. This past weekend, we have operated on more than 100 cataracts in partnership with the private sector through this MEC’s initiative project. We have expanded specialised services to weekly visits by an orthopaedic and a general surgeon, because to us, indeed, rural health matters and rural people deserve specialists’ services too.”