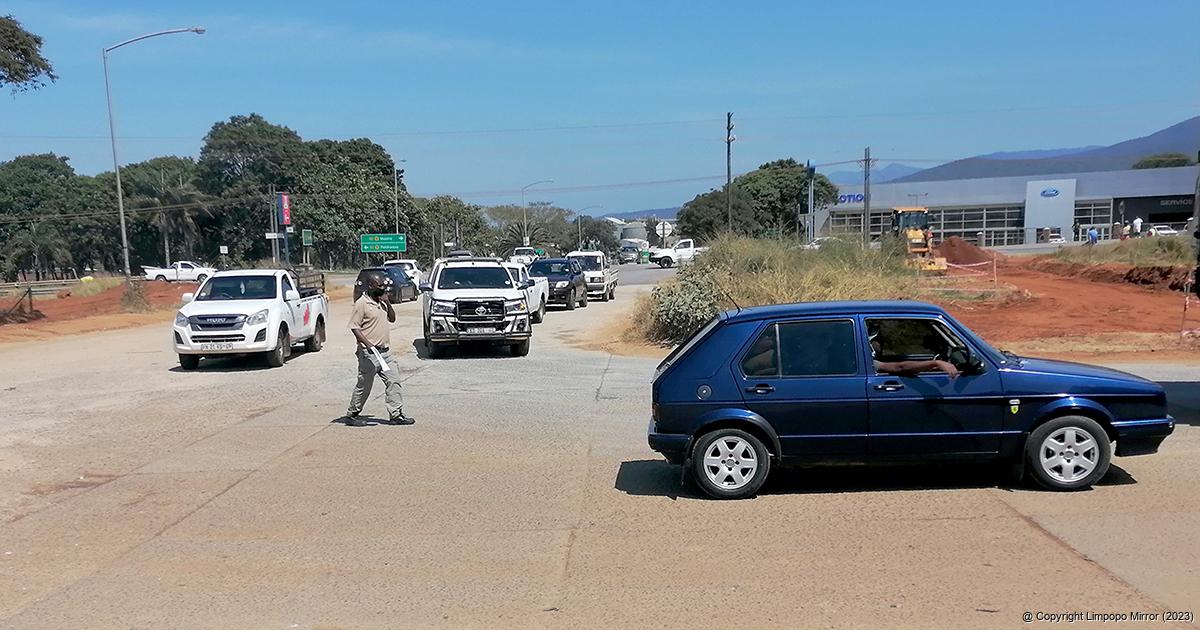 Detours from the N1 into Main Street in Eltivillas are being opened to allow business to continue. Photo: Bernard Chiguvare.

“This is a disaster … a total disaster,” said a business owner from Eltivillas, Louis Trichardt, last week. He was referring to the rehabilitation of Main Road, the main feeding route into the busy business complexes in this part of town. For months now, businesses have had to endure the inconvenience of customers’ being unable to reach them. Now the project may come to a halt as the project funds have seemingly dried up.

A follow-up meeting was held last Wednesday to report back to the concerned community why the project has been stalling. The meeting, held at the Makhado Municipality, was shrouded in secrecy, with very few of the affected people even informed about it. When the newspaper heard about the meeting, a reporter immediately went there, only to be told that members of the media were not allowed.

The newspaper’s argument that the conduct of the conveners was unconstitutional had no impact. Who exactly had convened the meeting was unclear as the municipality’s spokesperson, Mr Peter Muthambi, was not even aware of the meeting. Muthambi had to listen to complaints from the media and other stakeholders who were denied access to the meeting, but he could not do much. Complaints were referred to the municipality’s “legal people”, who clearly also had no clue how to handle the situation.

The parties present at the meeting were the contractor, Chauke Business Enterprise, the engineer, Innocent Sibanda, and representatives of the municipality. The meeting continued behind closed doors and the media had to rely on second-hand information about what was reported. One of the business owners, who did not want his name to be mentioned, said that they had never been informed of the meeting but had heard about it via the “grapevine”. Less than 10% of the people who attended the previous report-back meeting were informed.

The additional work will entail extra costs, which the contractor wants the municipality to pay for. If this means more than a 20% variation on the initial tender, the issue will have to go back to the council for approval.

“The work can’t carry on until such time as the municipality have approved the additional budget required to repair the unforeseen subsoil drainage issues. Only then can they throw the next level, which is mixed with cement etc, before they can pave the road which they have dug up,” the businessman explained.

On top of all this, the people present at the meeting heard that the contractor had not been paid since November last year. “This is a total disaster,” said the businessman.

“It was just a non-productive meeting, as we did not get clear answers of what is going on and when the rehabilitation of Main Street is expected to be completed,” said another business owner who was present at the meeting.

According to this newspaper's previous report on the situation (“Eltivillas businesses suffer as road works slumber”), the project has been affecting a number of businesses operating in Main Street as customers cannot gain access to the road.

On 22 February this year, a meeting with affected business owners and residents was held at Makhado FM’s offices, but no representative of Makhado Municipality was present. The general suggestion was that the contractor should open at least a part of the road to allow business to continue. However, according to the engineer, Innocent Sibanda, this would only add to costs. Sibanda also indicated that they were running out of time.

Ahmed Asvat, owner of AA Furnishers, is one of the businessmen badly affected by the project. Asvat was dragged to the CCMA in December of 2021 when he could not pay his employees bonuses, because of a drastic decrease in business since the project started. He says that it will affect his business even more if the project is not finished soon.

Masana Maluleke, who runs a pharmacy in Main Street, also attended the meeting. “We are none the wiser after this last meeting, but the general agreement was that they will start opening detours from the N1 into Main Street. As soon as they are finished, another meeting will be called.”

Completion of the rehabilitation of Main Street has now been extended to the end of June 2022. “This is definitely killing us,” said Maluleke.

Not the municipality, the social consultants or the engineer of the project could provide the newspaper with more details regarding the outcome of this last meeting.