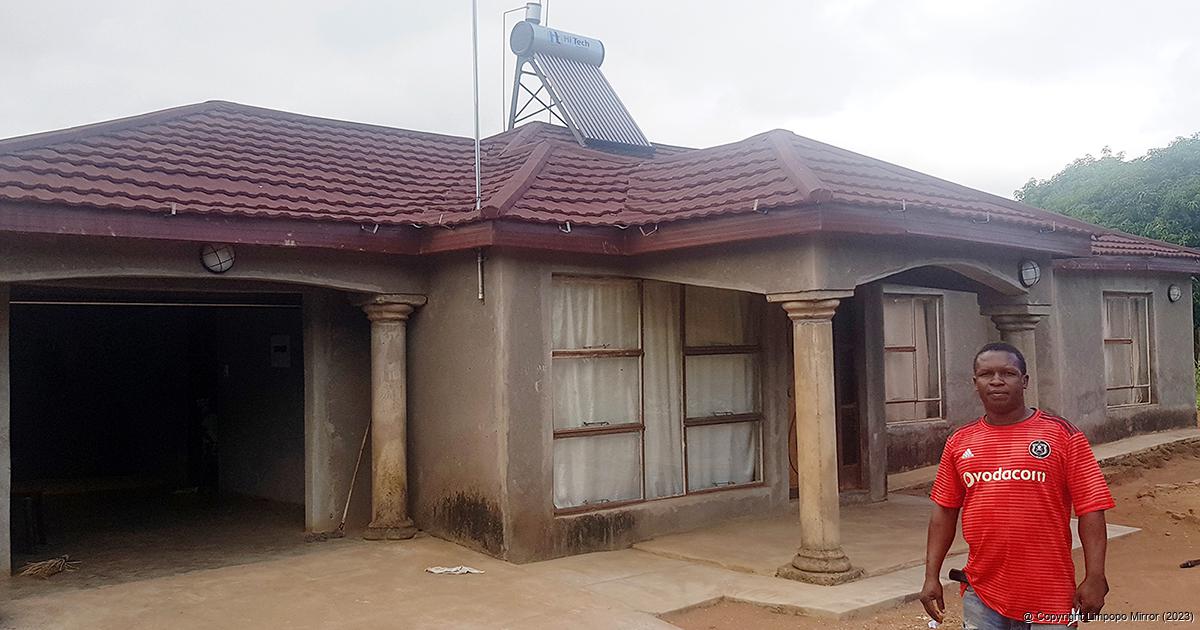 Tshinetise Albert Ranwedzi from Makonde village poses in front of the seven-room house he built through fetching water for his customers in a wheelbarrow and doing other odd jobs.

Don't judge a book by its cover, says 'poor' man with lovely house

Tshinetise Albert Ranwedzi (42) dropped out of school in 1998 when he was in Grade 11, because his mother was so poor that she was not able to provide for his basic needs. At times he had to go to bed on an empty stomach, sleeping on a grass mat without proper bedding.

Upon leaving school, Tshinetise approached some of his neighbours and offered to fetch water for them with a wheelbarrow, so that he could contribute to buying a little maize meal. More and more of the locals started to call on him for this service, and before long he filled up to five 1000-litre drums per day for his customers.

Besides fetching water, Tshinetise also cleaned people’s yards and debushed fields in exchange for cash. Year after year he kept on saving what he could from his earnings at the local post office, and his continued hard work paid off so generously that he was able to build a beautiful, fully furnished seven-room house for his family, becoming the toast of his village.

Despite all this success, Tshinetise continues to labour in the scorching sun every day, fetching water and firewood for his customers in his wheelbarrow in exchange for cash.

This hardworking man, who does not drink or smoke, says poverty has taught him how important saving money for the future is. “The local post office comes in handy because I don’t need any transport to go there to save money. Every little [bit] makes a very big difference because I was able to buy something very valuable. I encourage other unemployed people to start something for themselves to earn some money to sustain their lives.”

He says that building his beautiful house was not an easy task, but it became possible through dedication. “I used to live in a mud hut, but I saved money and built a one-room house. I then bought bricks and extended the house into two rooms. When I told people that I wanted to build a big house, they laughed at me, but I soldiered on because I knew what I was looking for. Now, my wife and two kids live happily in the house that I built for them through my hard labour. The house has four bedrooms, two inside flushing toilets and two bathrooms with showers. I will never stop fetching water for my customers and working in the fields because it brings food and shelter to my family.”

Tshinetise says people must not be so quick to judge a book by its cover. “When people see me pushing a wheelbarrow with water containers or firewood, they tend to look down on me, but when they come to my house, they cannot believe their eyes. I couldn’t finish my education, but I am saving enough, so that my children can get their qualifications and don’t have to suffer like their father did.”