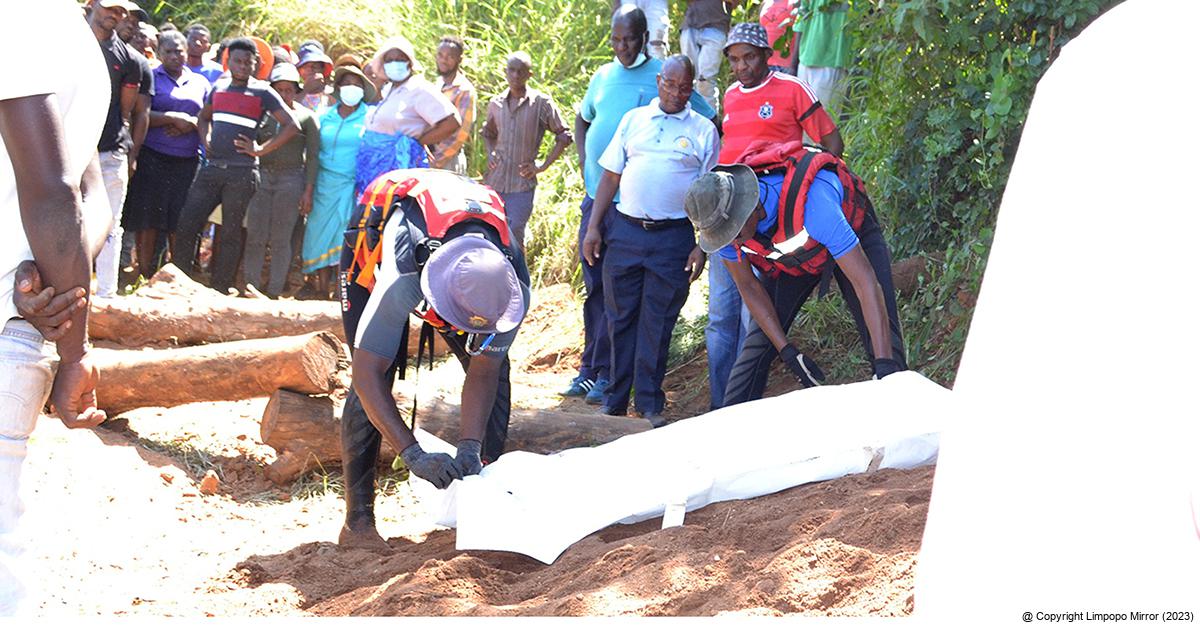 The body of 35-year-old man from Tshifudi Mushungwa village was retrieved from the Luvuvhu River in the Tshaulu policing area last week after he had drowned while searching for the body of another man, who had reportedly been caught in the river by a crocodile.

According to Limpopo police spokesperson Brig Motlafela Mojapelo, the deceased, Thompho Nemushungwa (35), allegedly got trapped underwater on Thursday, 24 February, while he was assisting the police and other community members in the search for Fhulufhuwani Munzhelele (24). Munzhelele, known as “Tsembetsembe”, was a fisherman from Kumbani village. He was apparently caught and dragged into the water by a crocodile the previous day (23 February) while fishing in the Luvuvhu River.

A community leader in Tshifudi village, Mr Rudzani Tshipepele, said that Munzhelele and a friend had gone fishing on the day of the incident, as they had done every day, throwing their fishing nets out. Tsembetsembe was happy when he caught some fish with the first try. When he threw his net out for a second time, his hand got tangled in the net and he felt something forceful in the water. He started to struggle to free himself from the net, but a crocodile overpowered him and dragged him under the water.

Tsembetsembe’s friend escaped and ran to the village to get help. A police helicopter was sent out and police divers and rangers from the Department of Economic Development, Environment and Tourism went in search of Tsembetsembe. The search started on Thursday (24th) and by the afternoon, six community members, led by Mr Thilivhali Ndovhe, went into the river where Tsembetsembe had been caught, armed with sticks to fight off the crocodile.

Nemushungwa was among these brave men, and during this search for Tsembetsembe he reportedly got trapped under the water and drowned. Bystanders, however, claim that Nemushungwa was also caught and dragged under by a crocodile, although the police did not confirm this, as they could apparently find no signs of a crocodile attack.

“While community members were searching for the two missing men on Friday (25th), a guy – one of the six men who went into the water with Nemushungwa on Thursday - came up with the idea to throw a rope with a fishing net and three fishing hooks into the water, and surprisingly, something was spotted in the water.” This was when Nemushungwa’s body was found and retrieved by police divers.

At the time of our going to press, local residents from around Tshaulu and Gaba villages were still hard at work searching for Tsembetsembe’s body.

The acting provincial commissioner of police in Limpopo, Maj Gen Jan Scheepers, urged people to be very cautious when fishing in the crocodile-infested rivers.

Spokesperson for the Nemushungwa family Mr Milingoni Nemushungwa told the media that they appreciated the hard work done by community members, the police and everyone involved in the search. “Thompho died tragically, but we are happy that we were able to find his body because now we can give him a dignified funeral. But we are also worried that the fisherman’s body still has not been found,” he said.

The late Nemushungwa will be buried at Tshifudi village on Thursday, 3 March.