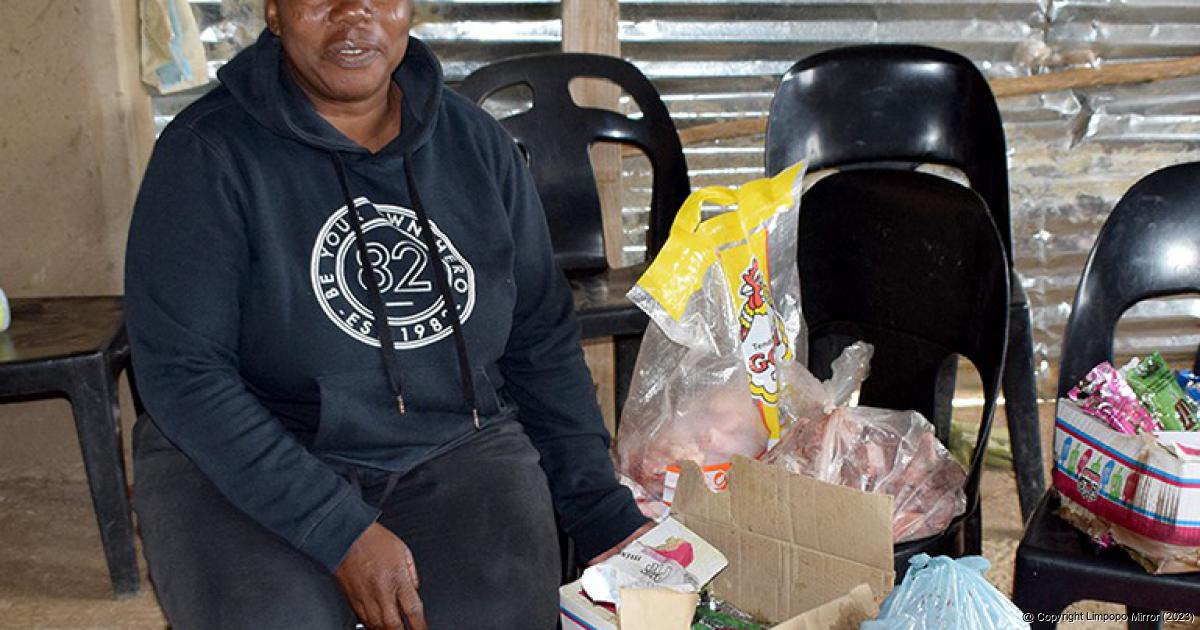 Ellen Ravhutendelw, photographed with the rotten meat and her stock. Photo: Kaizer Nengovhela.

Several families in Tshiozwi and Ha-Ramantsha are complaining about regular power outages that they say are making life almost unbearable for them.

Residents complain about being without electricity almost every time the weather, however slightly, deteriorates. According to one of the residents, who is also a local hawker, Ms Ellen Ravhutendele of Tshiozwi, the power went off about three weeks ago but has not been fixed since. “Our municipality has let us down and has forgotten that we voted for it. I had to throw away a lot of food from the freezer,” she complained.

She said that they were continuing to experience power disruptions, despite numerous attempts to register their dissatisfaction with the municipality. “We don’t use our fridges anymore. We buy takeaways sometimes,” she said. She said the situation had forced her to buy non-perishable foods because the fridges are not functioning.

Another resident, Ms Ndweleni Rambuda, said that living without electricity was an uphill battle. She said they had been left without electricity for months now. She has reported the situation to the mayor, Cllr Samuel Munyai, and she also sent him Whatsapp messages.

“If the wind blows or it rains, these villages become a dark city. To our surprise, this happens when the weather is normal too. Sometimes it occurs twice or thrice a day for many hours, and sometimes it lasts for several days. We have to use a gas stove to cook and heat up water for bathing and washing dishes. We spend R390 per week for gas. This is uncalled for. We have been suffering,” said Rambuda.

Mr Squadi Machaba of Ha-Ramantsha complained that he had had to rely on an unsafe paraffin stove for the past three weeks. “I am tired of living here. Life without electricity is an everyday struggle,” said Machaba. He said the community members were planning to take the rotten food and dump it at the municipality’s offices if the problems were not addressed.

The Makhado municipality’s spokesperson, Mr Louis Bobodi, told Limpopo Mirror that the municipality was working tirelessly towards addressing the situation. “Right now, our workers are working around the clock in an effort to try and restore the power supply to the affected community. We apologise for the inconvenience caused,” said Bobodi.

He said that during the outages, their call centre received several calls from residents wanting to know why their power had been cut off. “Instead of listening to our explanation, people just kept on swearing and cursing our telephone operators. They did not want to listen to any reason,” Bobodi said.