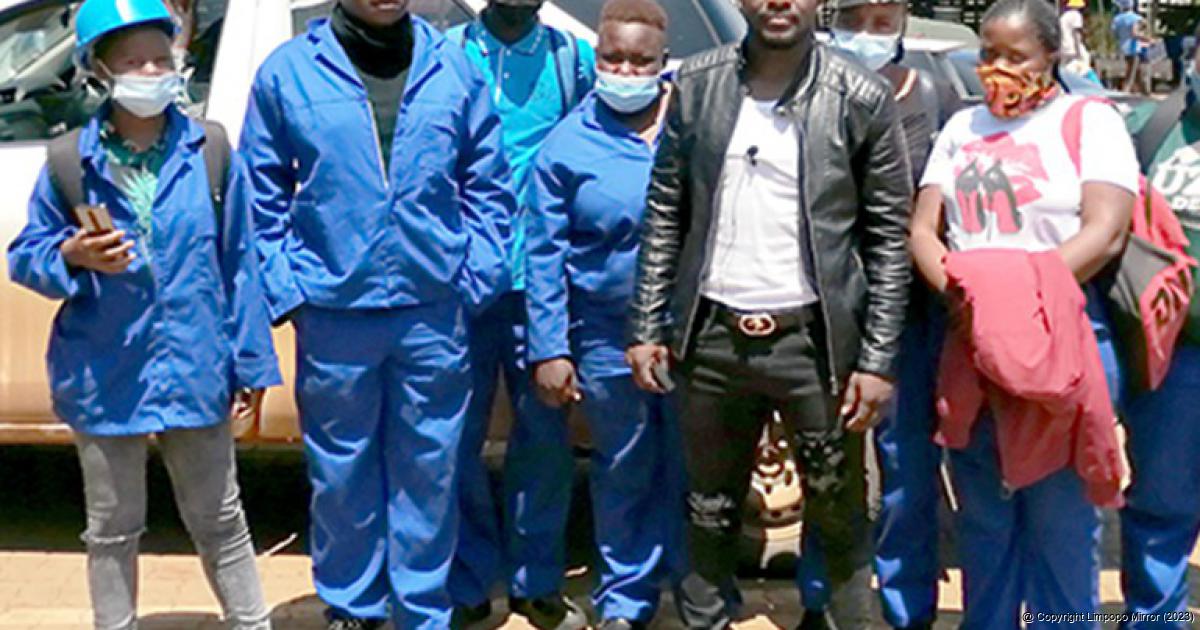 Solomon Ramurambiwa (centre, with black trousers), the interim chairperson of the Concerned Group of the Mamphodo Mushasha Begwa Community Property Association (CPA) with some of the interns attached to the CPA. Photo: Bernard Chiguvare.

The ongoing feud between the Concerned Group of the Mamphodo Mushasha Begwa Community Property Association (CPA) and their current management committee does not appear bound to end anytime soon.

The Concerned Group was established after a group of beneficiaries alleged that, among other grievances, inconsistencies had occurred with the administration of the association’s finances. They demanded that a new committee be elected, since the current committee’s term of office had expired a long time ago, but their demands seemed to be falling on deaf ears.

On 25 August this year, members of the Concerned Group protested outside the gate of the farm Melkhoutkopjes, threatening to shut down all farming activities. The farm is being managed by the Mamphodo Mushasha Begwa CPA. This protest action came despite a court interdict that was obtained at the end of 2020 that prohibits the Concerned Group from interfering with activities on the CPA’s farms.

Right after this protest, a court order (dated 30 August) was issued, stating that the Mamphodo Mushasha Begwa CPA was granted time from September 2021 to 30 November to prepare and elect a new committee. This, according to Solomon Ramurembiwa, the interim chairperson of the Concerned Group, has still not happened.

On Wednesday, 1 December, Tshinane Eric Mukwevho, the current CPA chairperson, was transporting a group of interns from Louis Trichardt to Melkhoutkopjes, a couple of kilometres south of the town. Mukwevho was allegedly pulled off the road near the Rissik Street/N1 crossing. Ramurembiwa approached him and snatched the keys of the bakkie he was driving (which is CPA property) from him. Ramurembiwa, along with other members of the Concerned Group, called the police and waited for them to arrest Mukwevho for not adhering to the court order (to elect a new committee by 30 November). According to Ramurembiwa, the police arrived and spoke to Mukwevho, but he was not arrested.

“The way the current committee is running the affairs of the CPA is totally out of hand. Despite the court order that allowed the CPA three months to prepare and elect a new committee, they still have not done so,” said Ramurembiwa. He further claims that the committee is robbing 17 interns of their stipends. According to him, the students are supposed to be paid R2 800 but instead are only paid R1 200.

The students confirmed that they were being paid short, and often got paid late too. “We are not always paid on time. The committee always come up with excuses. They told us we would get paid R2 800, but we only get R1 200. We are not sure where the difference is going to,” said Theophilus Ramurembiwa, one of the interns and the son of one of the CPA beneficiaries.

Mukwevho did not wish to comment on any of the allegations against the CPA.