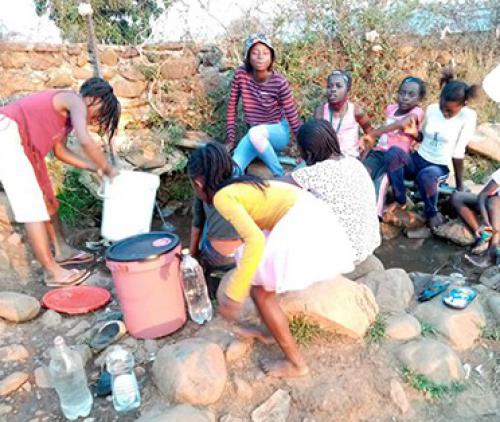 Young children of Siloam village queue to get water from the natural hot spring at their village.

At Siloam hot water is cheap, but remember to brush your teeth

For the past few decades, about 400 households of Siloam village in the Nzhelele valley have been enjoying free hot water from a natural hot spring. But where, many have wondered, does it come from?

Some residents believe that a volcano in the Tswime Mountain, a few kilometres away, must surely be responsible for the hot water, but that any active volcano exists in Limpopo has never been confirmed.

This mystery does not seem to keep the Siloam community awake at night, though. In fact, they consider themselves highly blessed, as the benefits they gain from the spring’s generous offering make daily life so much easier for them, in comparison to many other rural villages around Vhembe, who hardly have any water at all.

The hot water is conveniently utilised for plucking chickens, removing pig furs, laundry, bathing and countless other household needs that require hot water. The best is: they score generously on electricity use every month.

One downside to the water exists, though. With all the minerals in the water, it has a very unpleasant smell, and because of this one will seldom find the people using it for consumption. But not just the bad smell puts them off from drinking it. They say that drinking the water causes tooth decay over time. Many of the senior villagers indeed suffer from this dental problem, and that is why they call Siloam and its sister village “Tshisinisamano”, which roughly translates to “rotten teeth”.

Some of the local villagers also believe this water to have certain “magical powers”, for instance that bathing in the water ensures good luck and cures colds and fever. They say that, if you bathe in the water before an interview, you are more likely to get the job.

Siloam incidentally derives its name from the biblical Siloam pool in Jerusalem. When Jesus told the blind man to go and wash his eyes at the pool, the man recovered his eyesight, and this is why many of the villagers believe that the hot spring in Nzhelele has healing powers.

According to the spring’s history, the water was cold until 1969, when it inexplicably became hot overnight. Researcher Washington Nyabeze did some testing of his own at the spring. In May 2008, he had measured the water’s temperature at 67.5°C, and in June 2009, it was 63.3°C. In 2010, research by the University of Fort Hare found the spring at Siloam to be the hottest natural spring in South Africa. However, in 2012, more research showed that the temperature of the water had risen to 71°C.

“With the problem of water shortages in our area, this water comes in very handy,” one of the local villagers, Azwianewi Maphagela, said.