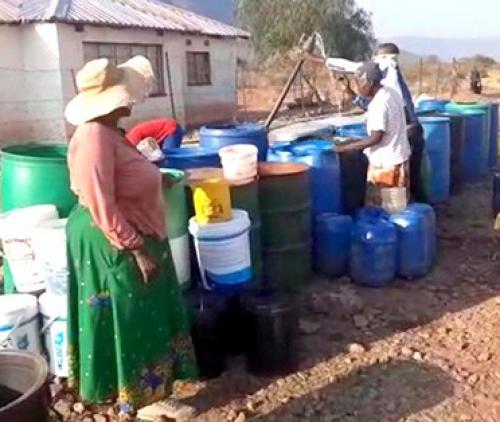 Residents from Matsa village in the Nzhelele area queuing for water with drums. Photo supplied.

Community comes up with a 'Plan B' to get water

Community members from Matsa village in the Nzhelele area have devised their own plan to secure clean drinking water. They collected money and are now diverting water from a nearby mountain spring.

For the past 20 years, the community of Matsa in the Nzhelele area has been without clean drinking water. Two years ago, water pipes were installed at the village, but nothing more came of this venture. The villagers were forced to rely on water from a contaminated fountain.

The lack of water forced the community to come up with a “Plan B” for them to have water for household use. Each household contributed R50 and from these contributions, pipes were purchased to draw water from a fountain at the top of the nearby mountain to supply this basic amenity to families.

The fountain is situated more than five kilometres from the village. Reaching the fountain is quite a journey, and to get there villagers have to pass through bushes on a footpath in an area where many snakes are found.

Mr Phineus Mamathuntsha, a pensioner from the village who came up with the idea of utilising water from the spring, said he could not stomach the hardship the community was enduring, especially when he saw the young children having to carry heavy water containers up and down the hills. “It was also becoming increasingly unsafe for the villagers to go down the river to fetch water because people with ulterior motives took advantage of the situation and attacked them.” Mamathuntsha said the growing incidents of ritual murder also led him to come up with a plan to make things safer for the villagers.

One of the residents, Mr Given Mamuthubi, said he was comfortable with the arrangement, as he could now access water without having to go to the trouble of carrying a full bucket over a long distance.

Members who could not raise the R50 to contribute are still forced to fetch water from the river, which is about three kilometres from the village.

The spokesperson for the Vhembe District Municipality, Mr Matodzi Ralushai, said the municipality would find ways to assist the many communities around Vhembe “over both [the] short and long term”.