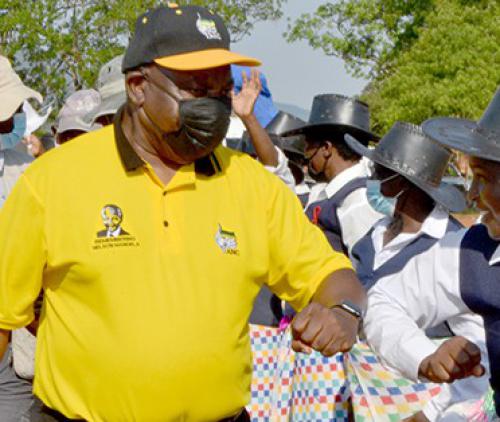 The ANC President, Mr Cyril Ramaphosa, warned councillors and mayors elected in the 1 November local-government elections that they must not steal the money meant for service delivery, and he promised that those who did steal money would be shown the door.

“We don’t want councillors and mayors who steal money meant for service delivery as soon as they are in power. It should be clearly understood that those lazy councillors, mayors … they don’t have a seat at the ANC,” said Ramaphosa.

Councillors and mayors who continue to give jobs to comrades, friends, and family members will be dismissed with immediate effect. “We want municipalities ready to deliver better services like water, electricity and roads to their communities,” said Ramaphosa.

Ramaphosa addressed supporters at the Makonde Sports Grounds near Khubvi village on Saturday after visiting Manini, Lufule and Ngovhela as part of his two-day visit to Limpopo. He was accompanied by, among others, Limpopo Premier Chupu Mathabatha and ANC Limpopo provincial secretary Soviet Lekganyane.

During a function held at the Old Peter Mokaba stadium in Polokwane on Tuesday, 19 October, Ramaphosa said that candidate ANC councillors had signed a pledge that bound them to use their tenure in the different municipal councils to serve people diligently and honestly.

According to Ramaphosa, a lot of complaints had been received from communities around the Thulamela Municipality about the shortage of water, the bad state of roads and interruptions of the electricity supply – often without any warning. He said that he hoped that the Vhembe District Municipality, which is the water-service authority, would address the problem of water shortages in some areas with immediate effect.