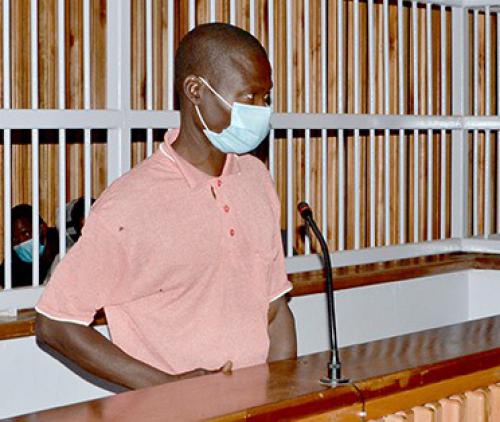 A 39-year-old man from Mukula-Thembaluvhilo village appeared in the Thohoyandou Magistrate’s Court on Monday, facing a charge of murder. He had allegedly beaten his older brother to death with a steel rod last Wednesday (13th).

Family spokesperson and eldest brother in the family Mr David Goma told the media that the deceased, Erick Ramudzuli (45) went on a traditional-beer drinking spree called Halwa ha mahafhe in Mukula after he had received his R350 Covid-19 Social Relief Grant. While the unemployed Erick was happily drinking, his younger brother, Maanda Ramudzuli (39), approached him, wanting a share of Erick’s money. A fierce fight broke out between the brothers, but people were able to break it up and get them to calm down.

According to Goma, the fight ended at the drinking spree and the brothers went home. However, not long after they got home, they started to fight again, and Maanda allegedly hit Erick with a sharp steel rod. Erick was rushed to the local clinic where he was certified dead on arrival.

Limpopo police spokesperson Brigadier Motlafela Mojapelo said that the accused already had a criminal record. In 2002, he raped a minor and was sentenced to 15 years’ imprisonment. In 2011, he was again charged with rape, and in 2014 he was charged with murder after stabbing a 61-year-old man to death.

Goma described Erick as a peace-loving person, while Maanda was called the “troublesome younger brother”. He said that the family regrettably did not take Erick’s complaints seriously when he told them that Maanda abused him. One time Erick claimed that he had been sodomized by Maanda several times.

Khotsimunene Rudzani Takalani, the spokesperson for the Takalani traditional leadership, said the fact that an ex-offender such as Maanda got parole and was walking the streets was worrisome. According to him, convicted criminals on parole should be monitored, lest they commit other crimes.

Maanda Ramudzuli’s case was postponed to 25 October while he remains in custody.

Ramudzuli was buried on Wednesday, 20 October, in the Mukula-Thembaluvhilo graveyard.