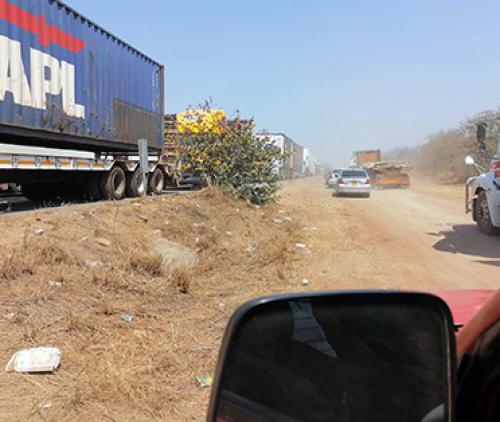 Stuck at the border

The delays at the Beitbridge Border Post seem to be continuing, and by mid-week, trucks hoping to travel north were queuing for several kilometres. Despite assurances from both governments that the situation is receiving the necessary attention, truck drivers are spending days next to the road, waiting to cross the border.

The problems at the border post started more than a week ago. On Saturday, the queue stretched for almost 11 kilometres from the border post to Musina. This section of the N1 practically turned into a one-way street, and very few trucks parked at the truck-stops.

Other motorists who use this road were left with their own frustrations, having to use an alternative route around this congestion, on gravel roads through farms, which they say is not safe at all.

“This is a very dangerous route. We can be stopped and robbed of our belongings by thugs at any time,” said Given, a Zimbabwean motorist. He said that this gravel road, mostly used by commuters travelling from Musina to the Beitbridge border, was not exactly suitable for light vehicles. The paths apparently cut across shallow sandy rivers and small bridges, then join the N1 again just before the China mall.

Meanwhile, the truck drivers who stand in queue complain that the situation is unacceptable. They are stuck for days without taking a bath and no toilets are nearby, which means that they have to relieve themselves in the bushes. They must also leave their vehicles next to the road and walk to areas where food vendors are operating to find something to eat or drink.

The reasons for the delays were unclear, but seemingly lie on the Zimbabwean side of the border. Earlier this month, the Zimbabwe Revenue Authority (ZIMRA) activated a new system that manages the tolling of trucks and drivers. The new system, as well as a new bridge that came into operation, seems to be causing massive delays.

Gavin Kelly, from the SA Road Freight Association, told eNews that a lot of finger-pointing appears to be happening at the moment. “What we have been told is that there are problems on the Zimbabwean side in terms of processing through, and this is now causing a backlog, but the Zimbabweans are saying the trucks are arriving at the border post with the wrong paperwork.”

The Zimbabwean media company, ZBC News, reported on Tuesday that ZIMRA had come up with a raft of measures to ease the pressure that has delayed the movement of trucks at the border post. These measures include creating express lanes for cars to expedite the clearance process, while a holding area for trucks has also been established.

ZIMRA’s acting commissioner general, Rameck Masaire, told ZBC News that the situation was expected to improve within the next 36 hours. A meeting was scheduled between ZIMRA representatives and the chairperson of Zimborders. “Our primary objective as we speak is to put in place modalities that allow traffic to pass through while we are attending to day-to-day operations, so that we don’t have this recurring problem. We expect this should be done within the next 36 to 48 hours,” he said.

Responding to the problem at hand, Limpopo’s MEC for Transport and Community Safety, Mavhungu Lerule-Ramakhanya, said: “We understand there is construction work going on on the Zimbabwean side, and they may not have space for the number of trucks that have to cross into Zimbabwe.” She said that, if truck drivers and truck owners adhered to the system that was implemented last year, no long queues should be experienced.

The Democratic Alliance’s Shadow Minister of Home Affairs, Angel Khanyile, called on the Minister of Home Affairs, Dr Aaron Motsoaledi, to engage with his Zimbabwean counterpart as a matter of urgency to resolve the problems. She also called on the chairperson of the parliamentary portfolio committee on Home Affairs, Mosa Steve Chabane, to schedule an urgent oversight of the Beitbridge Border Post. “The South African and Zimbabwean economies are both dependent on truck drivers, and they cannot be put in harm’s way because of a failure to plan contingencies during the renovations at the border,” she said.