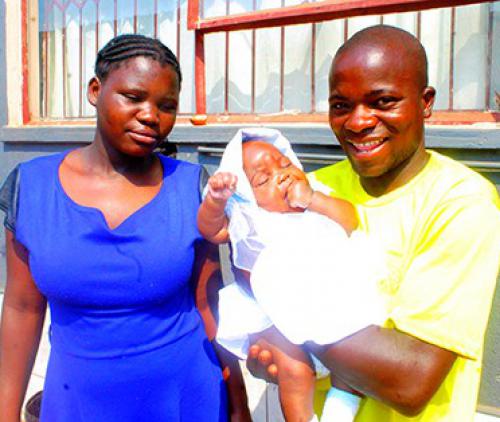 Baby Eliza is recovering from surgery

Four-month-old baby Eliza Khosa is in postoperative care at her Matsika home outside Thohoyandou after an extremely risky tumour-removal surgery performed on her head.

The operation was done on 21 September by a team of specialist doctors in the Pietersburg Provincial Hospital. Limpopo Mirror published the story on 3 September, titled “Hope for baby Eliza”.

Baby Eliza was born on 19 May this year in the Donald Fraser Hospital at Vhufuli. She was born with a strange growth on her head that looked like a thumb. The growth started getting bigger, which was very disconcerting.

Tension broke out between the Khoza family and the Limpopo Department of Health after doctors initially informed them that baby Eliza’s condition was not considered as life-threatening, and they were turned back twice.

The baby’s Mozambican parents, Solomon Khoza (32) and Maguta Sithole (19), can now smile again.  The baby’s mother said: “It was absolutely terrifying. It is the scariest thing I have ever gone through. The tumour grew bigger by the day and sat like a head on top of another head.”

Until the surgery, doctors did not know what kind of tumour had grown on the child's head.

“I was always in tears when doctors postponed the date of an operation. But I realised that I was rushing things because of little knowledge. I’m grateful that the doctors decided to wait to see if she truly needed surgery,” Maguta said.

After the surgery, the grateful mother went straight to the doctors and said “obrigada”, meaning “thank you” in Portuguese. “It is just unfortunate that I can’t express myself in English. The child is doing great, and we won’t skip the dates for check-ups,” Maguta said. She said that the little girl was recovering from the surgery.

The baby’s father, Mr Solomon Khoza, thanked the Limpopo Department of Health for tirelessly taking care of the baby until she was discharged. “I’m over the moon. God Bless the Pietersburg Hospital’s doctors. I say obrigada to the Limpopo Show Foundation, Mirror newspaper, the SABC, and all faith-based organisations for their advice and prayers during difficult times,” Khoza added.

The spokesperson for the Limpopo Department of Health, Mr Neil Shikwambana, said “Health care is for everyone, regardless of their country of origin”.