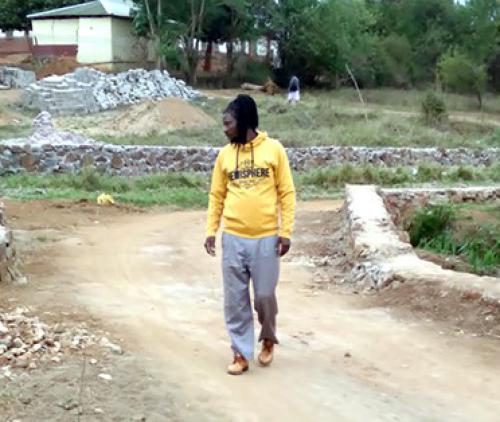 Vuledzani Jeremiah Nemutudi abandoned the building of his own house to build a community bridge between the villages of Itsani and Shayandima instead. Photo supplied.

Vuledzani Jeremiah Nemutudi from Itsani outside Thohoyandou turned into the village hero when he used his savings, which were meant to build the house he and his family had saved for, to build a bridge instead – for the sake and safety of the whole community.

No bridge existed between Itsani and Shayandima village, which made commuting between the two villages difficult for residents, as they were divided by the Tshidumbi River. People had to travel many kilometres around to get from one village to the other and back. This was not the sole concern for residents, though; a number of people had lost their lives in trying to take a shortcut by crossing the river – especially during the rainy season - including children who had to get to school.

The lack of a bridge was therefore not only highly inconvenient, but very dangerous too, and so Nemutudi found himself faced with a serious decision: to complete the building of his house, or to build the bridge.

For the 46-year-old hairdresser, the question as to which was more important was never in doubt. “The bridge was not an option, but a must for me. It used to be a nightmare for us whenever the river was in flood, not knowing how to pass. We were forced to venture into the water, and, for me, it was a big challenge as I would develop tonsillitis soon after,” he said. “I spent lots of money on medication and besides, it was not safe for our kids to pass there to school. Even the community was suffering, as lives had been lost in the flooding river. I had no choice but to take the money we saved for the house and channel it into building the bridge. This was no easy decision, but I had to do it for the sake of myself, my family and the community at large,” he said.

He indicated that the project, which he began three months ago and completed a fortnight ago, was not without its challenges. “There were some who were against it, but I had to ignore them and just continue with it. Now everybody, whether they walk or travel by car, enjoys a safe passage between the villages using this bridge, and the many children who attend school at Shayandima and Itsani do not have to worry about missing school on rainy days anymore,” Nemutudi said.

Nemutudi’s good deed attracted the attention of Tshisahulu’s senior traditional leader, Chief Thivhulawi Makumbane, who showered him with accolades and gave Nemutudi his full support. “This is a vision we should all support. The man sacrificed all for the benefit of the whole community. This is what we as leaders expect from our subjects, and we encourage others to also come up with developmental ideas in this village,” he said.