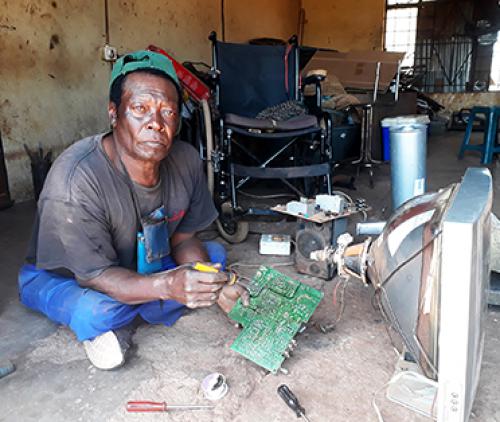 Mr Mavhaga fixes a television set in the dilapidated workshop structure of Thusanani Centre for the Disabled in Nzhelele. Photo: Godfrey Mandiwana.

When the Thusanani Centre for the Disabled in Nzhelele collapsed, it influenced many disabled people who relied on the services offered. Many left the area, but some have stayed and are using the skills they had obtained to do piece jobs and put food on the table.

The 72-year-old Mr Khorommbi Jack Mavhaga is one of the people who made use of the services offered by the centre. He has now resorted to fixing electrical appliances for people to generate an income.

The wheelchair-bound Mavhaga, of Gogogo village near Lake Fundudzi, is known for his skills in fixing anything from broken television sets to radios, DVD players, electrical kettles, electrical stoves and microwave ovens.

Mavhaga said he was trained to fix electrical appliances at the Chamdor Training Centre in Krugersdorp. “A doctor based at Siloam hospital, who was known to us as Dr Van der Brook, paid for my training in 1983,” he recalled.

“The same Dr Van der Brook found a building stand for us. The late president of the former Venda Homeland, Vho-Patrick Ramaano Mphephu, funded us to the amount of R20 000, while the ZCC’s Moria branch donated R15 000. Siloam hospital management, led by Dr Helms, donated corrugated iron and we erected a workshop structure,” he said.

“These donations were like fuelling the engine as we negotiated and opened tuckshops at Siloam Hospital, Hayani Hospital and Tshilidzini Hospital, so that health workers could buy food from us,” he said.

According to Mavhaga, they built houses for the disabled, so that they could stay closer to their workshop. “We opened a business selling vetkoek to school children and a business mending school uniforms. We built three workshop structures in the Vuwani, Tshivhulani and Siloam areas. The Embassy of Japan donated vehicles.”

The prosperous era, however, came to a halt. “A politician sneaked in and occupied a big position as administrator, taking advantage of our disabilities. He stole our money until nothing was left and vanished. He (politician) later died with our money,” he said.

“More than 50 people living with disabilities were left stranded and later deserted the centre because there were no materials in the workshops. Many of the disabled people who vacated this centre died relying on government grants,” he said.

“The little I generate from this new job is making a difference and I don’t completely rely on my disability grant. I have five children, of which one is still in Gr 12, while the other one is in the Vhembe FET College. Education is the future, and this is why I still pay for their education,” Mavhaga added.

“I will be glad if our government can resuscitate the Thusanani Centre,” he concluded.