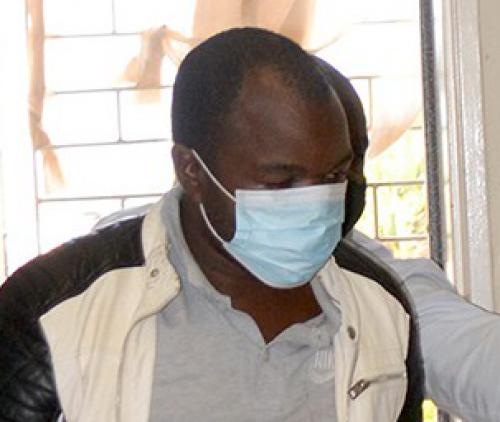 Mulalo Mathegu (36), the father accused of killing his three-year-old daughter with a hammer earlier this month, appeared in the Mutale Magistrate's Court on 21 September 2021. Photo: Silas Nduvheni.

No bail for dad accused of killing daughter (3)

Judgement on the bail application of the father who had allegedly killed his three-year-old daughter with a hammer earlier this month was reserved by the Mutale Magistrate’s Court on Tuesday, 21 September, after both the State and the legal representatives of the accused closed their arguments regarding his application.

The 36-year-old accused, Mulalo Mathegu from the rural village of Matavhela near Mafukani outside Thohoyandou, faces a charge of murder. This comes after he took his daughter from her grandparents’ house on the evening of 2 September, following a serious argument with the child’s mother that had apparently left him very angry. He allegedly later notified family and friends via WhatsApp messages and calls that he intended to kill the child and then kill himself as well.

According to a source, Mathegu drove his daughter in his car the next day to the Tshamutora Mountains near Gundani village, a few kilometres from Matavhela village. There, he allegedly took a hammer and hit her over the head with it. He then put her dead body in the boot of his car and tied a rope to a nearby tree to hang himself. However, just before he could kill himself, community members and police officials, who had by then been hunting for him, arrived at the scene. Mathegu ran from them, but they pursued him.

The angry father allegedly became aggressive and later injured a police sergeant. Another police officer then shot him in the leg and was finally able to arrest him, with the help of a crowd of people from nearby villages.

Mathegu’s legal representative, Advocate Rembuluwani Gadabeni, told the media that he had strong arguments for having his client released on bail. He argued before the court that his client was not a flight risk as he had allegedly been attacked by community members and the police at Tshithuthuni village while he was on his way to report the incident at the Mutale Police Station.

“Unknown community members and police started attacking him with stones that day, where he later injured the policeman out of self-defence, as he was alone. Now community members around Matavhela, Mufulwi and Mafukani are threatening that, if [he is] released on bail, they will be baying for his blood,” said Advocate Gadabeni.

The state prosecutor in Mutale, Attorney Mashudu Ramulumo, argued that the accused’s life might well be in danger if he were released on bail as he had also thrown rocks at the community members who were present during his arrest.

Mathegu’s bail application was postponed to Tuesday, 28 September, while the accused remains in custody.