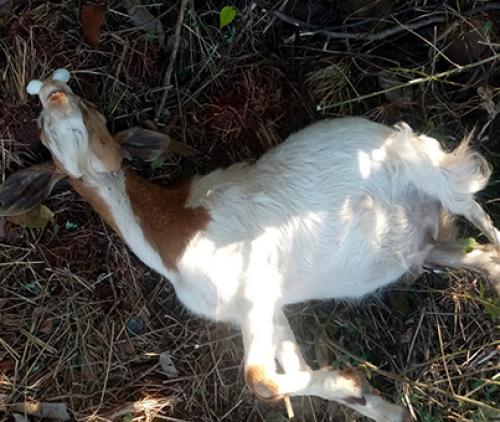 One of Mulatedzi Siphuma's pregnant goats that was caught in a snare.

Feud between cousins over goats causes rift in family

The feud between two cousins from Mandala outside Nzhelele, who both share the same passion for farming, has caused an unhappy rift between their families.

Mulatedzi Siphuma (47) farms with goats and does a bit of vegetable farming. With the proceeds of his goat-farming activities, he has managed to build himself a shop that enables him to put a plate of food on the table every day and take care of his family. His goats have become a central part of his life and he treasures them more than anything.

His cousin, Hendrick Nekomwani (31), farms with vegetables. When his crops were ravaged by baboons and monkeys, he put out snares to capture and stop them from eating his tomatoes. The result, unfortunately, was devastating, as the traps did not catch the intended culprits but ensnared and killed two pregnant goats belonging to Siphuma instead.

The incident has now torn the family in two, as Siphuma demands compensation for his lost goats to the value of R4 000 from his cousin, and Nekokwane does not have the money to pay him back.

Siphuma, who is also a civic leader, believes that his goats were killed deliberately. “He once told me my goats ate his tomatoes, but could not show me the damage. Last month I was called to his place, where I found two of my pregnant goats hanging dead by their necks. I did not look twice and left. His father tried to apologise on his behalf, but I cannot accept it as I feel it was deliberate. I asked for R4 000 compensation for my loss, but they are not prepared to compensate me. These goats are my livelihood as I am unemployed. It is like I lost two children. I am very saddened and left with no other option but to open a case,” he said.

Nekokwane’s father, Headman Ntsundeni Nekokwane, said the case was one of a mistaken target. “My son has lost a great deal through baboons and monkeys that ravaged his tomato crops. That is when he decided to put snares to catch them. But it ended up causing this damage when the goats were caught. This is unfortunate to the family, as these boys are cousins. We tried to find an amicable way to resolve the issue as a family, but we cannot raise the amount that he demands as compensation. We are still going to try and see to it that family ties are not broken amidst this problem,” he said.