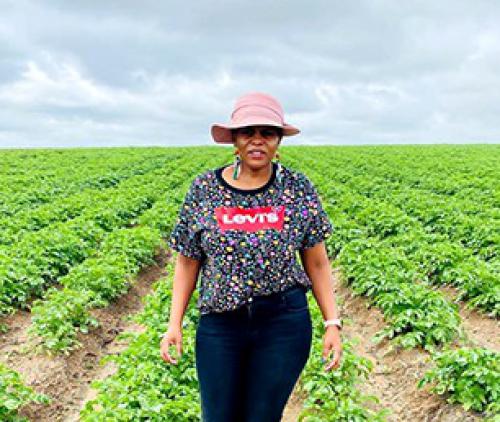 Lawyer-turned-farmer is busy growing a bright future for herself

Ms Khakhu Mutheiwana (34), a local farmer and budding agricultural entrepreneur from the rural village of Ha Mulima Mphuphuledzhi, is growing a bright future for herself.

Mutheiwana is a qualified lawyer, but has decided to take an entrepreneurial route because, like most young people in her village, she comes from a disadvantaged family. She said that, when she realised that a gap existed in the province’s agricultural industry because so few local black people farmed commercially, she decided to switch her focus from selling food to producing it.

She acquired 500 hectares of land and hired 15 permanent and 20 temporary workers. She plants potatoes and sweet potatoes, and said she still faced some of the challenges she had had as a young female farmer, but she remained resolute in her dreams.

This vibrant and ambitious woman says she would love to see more local women farmers emerge and thus offers training and technical support to other young producers in the province.

“There are many opportunities for women in agriculture. If you are focused, you will never be afraid to take a giant leap into the unknown. We must look at agriculture holistically and not just as an operation of producing and selling vegetables. Women can start their own cooperatives and become pillars in our economy by becoming their own bosses,” she said.

Mutheiwana said that women would never be free until they started to realise their worth, especially when regarding the entrepreneurship fraternity. She advised other women to seek as much information as possible to equip themselves with farming skills. “Make informed decisions and don’t be afraid to venture into agriculture. There is not a specific job for a specific gender anymore; the world is changing on a daily basis. It is time to stop talking too much and start implementing agricultural skills.”