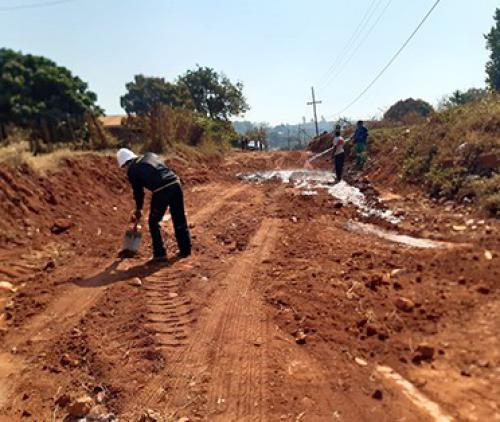 The community of Vhufuli village outside Thohoyandou have been waiting two decades now for the tarred road that was promised to them by the local government. Many of the children who were born at the time of this hearty promise have since grown into adults and are now working and providing for their own families. And still no tarred road.

The dirt road that these villagers use every day stretches for about five kilometres from Donald Fraser Hospital to Ha-Demana and connects to the main tarred road used by taxis. During the rainy season, buses struggle to get to the village and commuters are often left stranded. Disabled and elderly people who cannot walk the five kilometres to catch taxis at the tarred road suffer the most during these times.

As summer starts to approach, with the promise of its usual measure of rain, residents have come to the conclusion that they can no longer wait for more empty promises, and with that came the decision to take matters into their own hands and embark on a project to improve their situation by fixing the road themselves.

The residents have each contributed according to what they were able to, and at last the project is up and running. The project spokesperson, Mutendi Tshivhase, told Limpopo Mirror that they knew that as soon as the rains started, they would be suffering. “We have been waiting for far too long. When the elections come, the politicians show up here and promise us heaven and earth, but as soon as they are elected, they point to the IDP.”

He said that although they had already contributed to this project from their own pockets, they still needed funds to buy cement. “We are happy that the project is getting the full support from the community, and for sure we will overcome this,” he said.

Tshivhase describes them as “a peaceful community” that does not believe in “burning tyres” for better services, and that is why they have decided to rather do things themselves, instead of resorting to violent protests.

Thulamela municipal spokesperson Nndwamato Tshiila commended the community on their initiative. “We have assisted many communities who are doing things for themselves. But as a municipality we have to budget for such initiatives if the community involves us in advance,” he said.