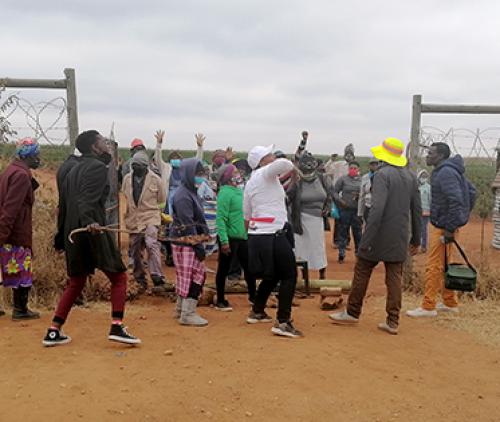 Members of the Concerned Group of the Begwa Community Property Association (CPA) protested outside the gate of the farm Melkhoutkopjes last Wednesday (25 August), threatening to shut down all farming activities. The farm is being managed by the Mamphodo Mushasha Begwa CPA.

Wednesday’s protest action came despite a court interdict that prohibited them from such activities on the CPA’s farms.

In May this year, Limpopo Mirror reported on the infighting among members of the Mamphodo Mushasha Begwa CPA. The Concerned Group listed their grievances, including claims that funds were being misused, and insisted that a new committee be elected, since the current committee’s term of office had already expired a long time ago.

A number of protest gatherings by the Concerned Group on the CPA’s farms - during which farm workers had been ordered to stop work - had forced the management to take action and a court interdict was finally obtained at the end of 2020 to stop the Concerned Group from interfering with activities on the farms.

Solomon Ramurembiwa, the interim chairperson of the Concerned Group, threatened that, if the old management did not want to step down, the crops on the farm would die. “We have even tried through the courts to have a new management elected, but failed. Today (25 August) members of the Concerned Group have decided to shut down all activities at the farm. No one will take care of the crops until we have a new management. The Department of Rural Development and Land Reform says one thing to us and another to the current management,” claimed Ramurembiwa.

The Concerned Group called on the Department of Rural Development and Land Reform to intervene, so that a new committee can be elected immediately, in spite of the pandemic.

Tshinane Eric Mukwevho, who had served as chairperson of the CPA since 2013, did not wish to comment as the matter is still to be heard at the Limpopo High Court’s local division in Thohoyandou. However, to support their application for a court interdict against the Concerned Group, Mukwevho apparently stated that elections had in fact been held again in 2018, and that the same committee members had been re-elected, presumably for another five-year term.

Mukwevho was watching the Concerned Group from his car as they toyi-toyied at the gate of the farm.