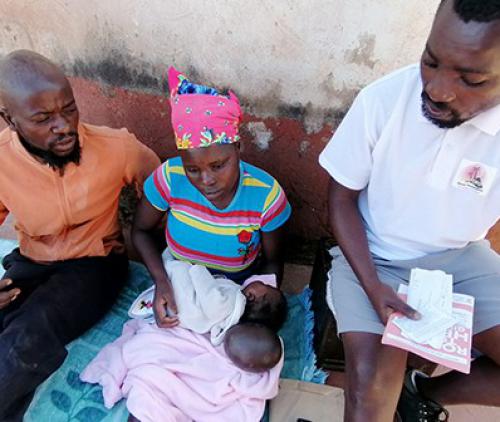 The baby's mother, Maguta Sithole, flanked by Solomon Khoza and Lytton Mabalane at their Matsika home near Thohoyandou.

A baby girl born with a massive and possibly life-threatening tumour growing on her head will hopefully get much-needed medical help soon. She is now waiting in line for an operation to remove the tumour at the Pietersburg Provincial Hospital.

Eliza Khoza was born on 19 May this year at the Donald Fraser hospital at Vhufuli. Her father is Mr Solomon Khoza (32), a Mozambican citizen who found refuge at Matsika village near Thohoyandou. Her mother is the 19-year-old Maguta Sithole, also from Mozambique.

According to the father, the baby was born with a strange growth on her head that looked like a thumb. This growth started getting bigger, which was very disconcerting. The doctors then tried to arrange for an operation at the Mankweng Hospital in Polokwane.

“On our arrival at the Mankweng Hospital in June, we were told that the baby was too young for an operation, and we had to turn back home,” said Khoza. “The doctors told us they would attend to her on the 24th of July at the Pietersburg Provincial Hospital. Come the 24th of July, the provincial hospital took us from pillar to post, saying they were dealing with emergencies only. They further told us that our baby’s condition was not an emergency and (they) would attend to her in the first week of September this year,” he said.

“They were merciless in their utterance. I thought they were taking advantage of us being foreigners. We returned back home with heavy shoulders and had been watching the tumour grow bigger day by day,” he said. The tumour “sat like a head on top of another head” Khoza said. “I looked at my innocent baby and thought she was going to die,” he added.

Khoza then approached a local non-profit organisation, the Limpopo Show Foundation (LSF), asking them to assist. “The reason why I involved the LSF was to pressure the Department of Health, because the LSF can be a voice for the voiceless.  I always see those people helping members of the communities who don’t have IDs and SASSA money around this area,” Khoza said.

A director of the LSF, Lytton Mabalane, said he had received a letter from the Khoza family, asking for assistance. “I didn’t hesitate to contact the Limpopo Department of Health. We put pictures of the baby on social media and the public reacted in a loud voice,” he explained. This also prompted the MEC for Health, Dr Phophi Ramathuba, to dispatch an ambulance to fetch the baby girl. “We help people, regardless of race, gender or country of origin,” said Mabalane.

The spokesperson for the Limpopo Department of Health, Mr Nail Shikwambana, said the Khoza family must be patient for a while longer, because the baby was in the hands of the doctors and an operation would be conducted soonest. He said medical tests were being conducted to determine whether they had to operate or just treat the tumour in another way.

“There were two other patients with the same condition in the queue who came before the Khoza baby. Doctors had to operate and observe the two before they could operate on the baby in question,” he explained.

Shikwambana explained that doctors would not simply admit a patient and start with surgery. They first had to conduct a series of medical tests to check for substances released by the tumour.

“It is true that an ambulance was dispatched to ferry her to the hospital three weeks ago,” said Shikwambana, but added that they could not be pressurised by members of the public to do operations. “Health care is for everyone, regardless of their country of origin,” he said.