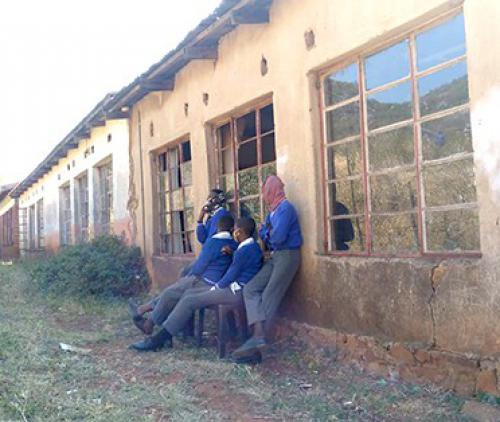 On the outside of the school buildings, the broken windows and paint peeling off cannot be ignored.

Vhusendeka school was once a dream, now a headache

In the mid-80s, the community of Tshivhilidulu in Nzhelele had a vision of an own school for their children. Residents of the area contributed R50 per household and in 1988 a school with two classrooms saw the light.

Vhusendeka Secondary School was supposed to grow and form the basis for the education of a new generation. The school, however, is starting to fall apart and, after years of neglect, is no longer a showcase for anything. The school now has six usable classrooms, but they are in very poor condition.

Besides being located on top of the mountain, the school is also faced with serious infrastructure and sanitation challenges. The building is in a state of decay, with paint peeling off the walls. The floors in the classrooms are damaged, leaving learners to attend classes in a dusty environment. In addition to the building’s poor condition, learners still use pit latrines.

The issue of pit toilets in use at Limpopo schools is a very sensitive one. Section 27, a public-interest law centre that advocates for access to healthcare services and basic education, has been in and out of court with the Department of Education in Limpopo, demanding that pit toilets be eradicated completely.

In 2014, five-year-old Michael Komape drowned after he fell into a pit toilet at his school in Limpopo. The Supreme Court (SCA) of Appeal in Bloemfontein ordered that the family of Michael Komape be paid more than R1 million for emotional shock and grief.

The deputy chairperson of Vhusendeka Secondary’s school governing body (SGB), Mr Naledzani Mugali, said the SGB was tired of watching children climb a mountain every day to get to the dilapidated school.

“We want a new school in a new location. The school is too far on top of the mountains and the area is bushy. It is not safe for our children to go to school.  We want improvement in the school; we don’t have computer labs and other basic learning materials,” Mugali said and added that they also wanted proper toilets.

The Department of Education Limpopo’s spokesperson, Tidimalo Chuene, said that Vhembe West’s district infrastructure official would visit the school to conduct an assessment of the current infrastructure. “Possible interventions will then be determined, based on the assessment report, and presented to stakeholders for buy-in,” she said.