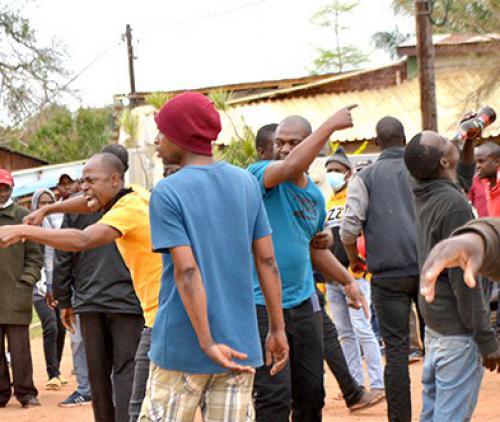 Concerned residents of Mukula Village were blocked from entering Vhamusanda Mpfuneni Takalani’s kraal on Saturday, 21 August, to hand over their memorandum of concerns. Photo: Silas Nduvheni.

What was supposed to be a peaceful march by concerned residents of Mukula Village on Saturday, 21 August, nearly ended up in chaos when a group of drunk people blocked the road to the entrance of the Mukula traditional leadership’s kraal.

A community leader in Mukula Village, Mr Daniel Nesamari, told this newspaper that residents were about to hand over a memorandum of their concerns to the traditional leadership committee (Khoro ya musanda) when one of their members got punched by one of the hooligans. The next thing, he said, fists started to fly between the two groups, right at the entrance gate of the chief’s kraal.

“We started our peaceful march from Jackson City in Mukula Village to the kraal of Vhamusanda Mpfuneni Takalani, but were surprised to find the traditional leader’s gate closed off with red tape. We were prevented from handing the memorandum over as the group of drunken hooligans blocked us,” said Nesamari.

According to him, residents’ main concern is the lack of clean water in the village. He said that the former Deputy Minister of Environmental and Water Affairs, Rejoice Mabudafhasi, had come to the village a few years ago and pledged R2 million to be used for a water project.

They also have a need for more houses and business stands. Nesamari said that, as their children grew up, they did not want to live with their parents anymore and wanted to start their own businesses.

Also, the village had apparently received funding from the National Lotteries Commission for the building of a community hall, which had been completed, but as yet still remained a white elephant that was not being used.

Lastly, they felt that their local civic organisation was not serving the community’s needs as it was supposed to.

In response to the complaint of being barred from entering the chief’s kraal, Khotsimunene Rudzani Takalani said that the traditional leadership of Mukula had been surprised by the concerned group’s unexpected march to the kraal as no prior appointment had been made with the leadership.

“We want to engage with the communities as the traditional leadership of the village, but things must be done formally, then we will take it from there. We advise the leaders of the concerned residents to make an appointment and tell us when they plan on handing over the memorandum of their concerns,” said Takalani.