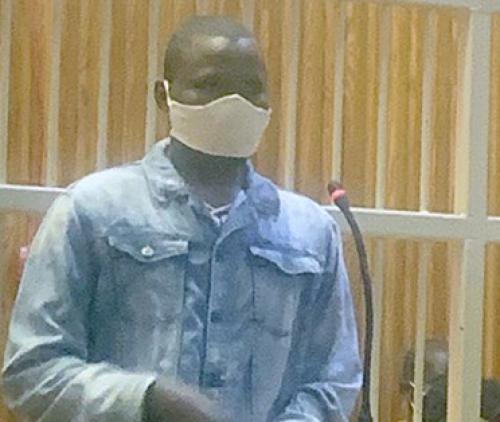 One of the accused in the SAMWU murder trial, Percy Radzuma (33), was denied bail by the Thohoyandou Magistrate's Court on Thursday, 19 August. Photo: Silas Nduvheni.

Suspect in SAMWU murders lied about his history, court told

Percy Radzuma, one of the four men accused of the murders on SAMWU members, was denied bail by Magistrate Rendani Netshiunda at the Thohoyandou Magistrate’s Court on Thursday, 19 August.

Percy, his two brothers, Simon and Ndivhuwo Radzuma, and Thabo Sibanze stand accused of the murder of SAMWU officials, Mr Ronald Mani (50) and the union’s former acting national president, Mr Timpson Musetsho (50), in 2019. Both men spoke out about municipalities in the Vhembe District that had invested millions of rands of public funds in the now-liquidated VBS Mutual Bank. The suspects were also linked to other criminal cases that the police had been investigating over the years.

Percy was the only one of the four suspects who applied for bail on 10 August. His application, however, was rejected because he told the court that he was a businessman and taxi owner, which proved to be untrue. He also failed to mention that he has a criminal record for previous offenses, which had only been revealed through extensive police investigations. Judge Netshiunda also said that the suspect was dangerous to the community, as all his cases had been pre-meditated.

The State Prosecutor in the Thohoyandou Magistrate’s Court, Ms Mashudu Nekhumbe, said the state challenged all arguments stated in court by the suspect’s legal representative, Advocate Thihangwi Nelufule. According to Nekhumbe, the state has a strong case against the suspect.

Limpopo police detective Captain Tshinyadzo Ndou told the court under oath that the suspect (Percy Radzuma) had shown him seven places where he and his two brothers had hijacked and taken vehicles during robberies around Thohoyandou.

Captain Ndou also told the court that the younger brother, Simon, had shown them where he and his co-accused had killed the two SAMWU officials. Simon told the police detective that he was the one who had shot and killed Mani, while Musetsho had been shot and killed by his brother, Percy.

“We understand that communities outside are angry about the brutal killings of their relatives and are baying for the suspect’s blood if released on bail. We have not yet completed our police investigations. The suspect might intimidate the witnesses and there is the possibility that even more suspects might be arrested regarding the killings of the two SAMWU members,” added Captain Ndou.