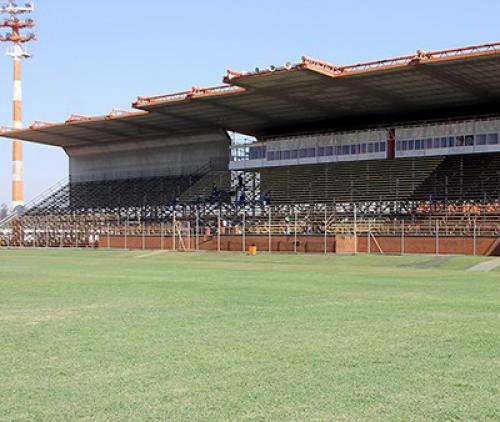 The Thohoyandou Stadium may be a stadium with no matches this soccer season.

'We can't afford to play here'

The three Vhembe-based teams playing in the GladAfrica league are considering moving their home matches elsewhere, because of the high rent charged by the Thulamela Municipality for using the Thohoyandou Stadium.

This season, the Vhembe District has three teams competing in the GladAfrica Championship, namely Black Leopards, Venda Football Academy (VFA) and Tshakhuma Tsha Madzivhandila (TTM). The three teams are supposed to share the Thohoyandou Stadium as their home ground.

The teams can apparently not afford the R27 795 per match to use the Thohoyandou Stadium. With Covid-19 restrictions still in place, spectators are not allowed at matches and the teams have limited options available to increase their income. The three teams are apparently considering to rather use the old Peter Mokaba Stadium as their home ground for the season, where the rent is only R5 000 per match.

Black Leopards had already forfeited their home-ground advantage the past weekend and their match against Polokwane City was moved to the old the Peter Mokaba Stadium. This match ended in a 1-all draw.

Black Leopards’ communication manager, Mr Tshifhiwa Thidiela, said that they had written many letters to the municipality, trying to meet with them and discuss the issue, but they did not get any response. He said that the current situation in the country caused them to play in an empty stadium, which cost the team a lot of money. “There are a lot of issues that come with the renting of the stadium. To just give an example: there’s security, there’s accommodation,” said Thidiela.

He said that in 2018, when his team returned to the elite league, the PSL had ruled that the Thohoyandou stadium was unfit to host league matches. They quickly had to pay R50 000 for the maintenance of the stadium and had to search for sponsors to pay more than R700 000 to renovate the stadium.

Thidiela said the Thulamela Municipality had seemingly forgotten what had happened in the past. He criticised the municipality for regarding sports clubs to be the same as local vendors. “In other provinces, teams are given money by their municipalities and are not paying any cent (for the renting of stadiums). In our local municipality, we pay,” he said.

Thulamela municipality’s manager for Sport, Arts, and Culture, Mr Ronald Makhadi, said that they had reduced the rental fees for the stadium in consideration of the impact of the Covid-19 pandemic.

“Three teams have shown interest in making use of our facility in Thulamela, but I cannot guarantee that they will all make use of them,” he said. Makhadi then explained that the municipality had already allowed a 36% discount for the teams, taking into consideration that most of the games were being played behind closed doors. After the discount, the rent is R27 795, which means that the “normal” rent would be just more than R43 400. The rent for Makwarela Stadium is R24 321 and for Makonde and Makhuvha Stadiums it is R10 423, Makhadi said.

Makhadi said that they could not reduce the tariffs any further. He added that they were in the process of trying to find sponsors to assist the three teams to pay the rent at the stadium.

For the time being, chances appear to be good that the three teams will move to the old Peter Mokaba stadium, where they will share the stadium with Polokwane City. This may mean that no professional football matches will be played this season at Thohoyandou Stadium.

(Saturday’s match scheduled between VFA and TTM is still to take place at the Thohoyandou stadium. VFA’s team manager, Mr Tenda Masikhwa, said that they are in the process of negotiating with the municipalty and a final decision will soon be made.)