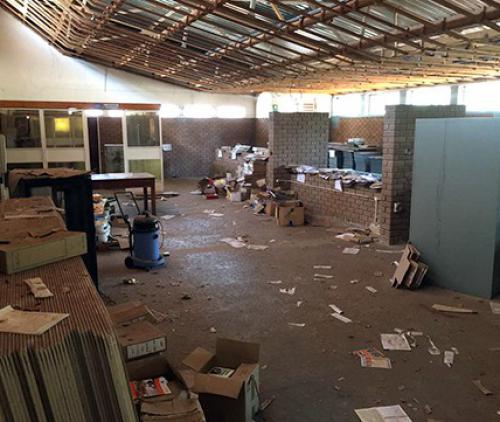 A whole section of roof at the Musina Magistrate's Court building is without a ceiling after it apparently collapsed during the heavy rains earlier this year. Photo supplied.

The wheels of justice have all but ground to a halt in Musina after the Department of Labour issued a Prohibition Notice against the use of Musina Magistrate’s Court’s facilities on Tuesday, effectively closing the court indefinitely.

The Prohibition Notice was issued by Mr Mishack Matsi, the Director General for the Department of Justice and Constitutional Development, following a site visit to the facility on Monday, 26 July. During his site visit, he concluded that the use of the cash hall, Court A, District Court and Court B Regional Court posed an “immediate danger of collapse and may cause fatal injuries or death to persons on account of structure support failure”. He further stated in his report that the “use of electrical distribution boards that do not have covers in which circuit breakers and bare wires are exposed and easily accessible poses a danger of electrocution, death and fire to persons. The electrical supply must be switched off to avoid the imminent danger of death and fire”. He concluded his report by stating that the use of damaged electrical extension cords and cables connected to UPSs in the cash hall on a permanent basis also posed an immediate hazard.

As news of the closure of the Musina Magistrate’s Court started to surface, so too did photos of the courts’ dilapidated state. One photo shows how a section of roof is held up by loose bricks stacked on top of each other. Another photo show how a whole section of roof is without a ceiling after it had apparently collapsed during the heavy rains earlier this year. The heavy rains also damaged the building’s foundations.

The sorry state of affairs at the Musina Magistrate’s Court left legal practitioners and members of the public dumfounded. “Be advised that matters will be postponed outside court/virtually and/or telephonically until arrangements have been sorted by the DoJ [Department of Justice] and DPW [Department of Public Works],” said Matsi in the Prohibition Notice to all legal practitioners in the Limpopo Province. The maintenance of the building is the responsibility of the Department of Public Works and has been lacking for months now.

In the statement, certain contingency measures to mitigate any resultant impact on service delivery are announced. These include:

* That cases will be postponed outside the court building on a daily basis;

* That witness fees/cash hall, domestic violence applications and already enrolled maintenance matters will be attended to from the available mobile structure and that measures have been put in place to avoid staff congestion, and to comply with all Covid-19 protocols under Alert Level 3; and

* That arrangements have been made by consent of all stakeholders to have the high-profile SANDF case bail application case moved to Louis Trichardt court on Thursday, 29 July.

According to Mahlangu, service delivery at Masisi Periodical Court is not affected and this court is still sitting on Tuesdays and Wednesdays as per their schedule. “For service-related enquiries, please contact the Area Court Manager, Mr TJ Munyai, on 084 498 8686 or 079 162 8240,” said Mahlangu.