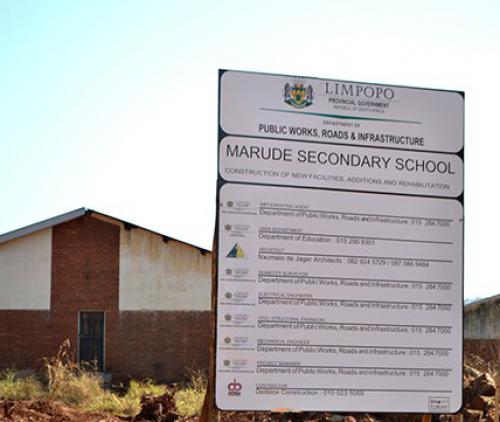 The R41 million infrastructure development and renovation project of Marude Secondary School in Thohoyandou has finally begun and is scheduled to be complete by the end of March 2023.

The project was launched during a sod-turning ceremony, led by the MEC for Public Works, Roads and Infrastructure in Limpopo, Namane Dickson Masemola, earlier this year.

The school was started in 1999 to cater for maths, science and commerce learners and is housed in the former Venda College of Education buildings, which are now old and dilapidated.

Masemola said the massive upgrade of the school formed part of infrastructure upgrade projects at six schools in the district that he and the MEC for Education, Ms Polly Boshielo, had launched on 26 January.

The project is expected to have economic spin-offs that include subcontracting to the tune of about R12 million and the creation of roughly 50 job opportunities over a period of 24 months.

Masemola warned that shoddy work in building the centre would not be tolerated and encouraged the local municipalities to actively take part in monitoring and evaluating work during the construction phase.

The upgrade comprises, among others, the construction of three new combo technical workshops, one nutritional centre, five new classrooms and 18 new waterborne toilets, as well as the renovation of existing classrooms. “We want to see the school progress well after building them better infrastructure, as modern buildings mean nothing if matric results don’t improve,” said Masemola.

The figures quoted for the project costs differ vastly from what is reflected in the Vhembe District Municipality’s integrated development plan (IDP). In the 2020/21 IDP document, Vhembe budgeted that R26 million will be spent on the renovation project. No budget allocations are made for the 2021/22 and 2022/23 financial years.

The project manager for the Department of Public Works, Roads and Infrastructure, Mr Hampton Mabasa, explained that the reason they left the figures out of the 2022-2023 budget was because the project belongs to the Department of Education and some financial adjustments might still be made to the project.

The principal of Marude Secondary School, Mr Alex Muthelo, was very happy about the upgrade of the dilapidated buildings. “It is long overdue. The project was scheduled to start in 2016, but delayed by the Vuwani demarcation strike, which resulted in many rural schools burning down.  We now promise to work hard to improve our matric results, without excuses,” Muthelo said.