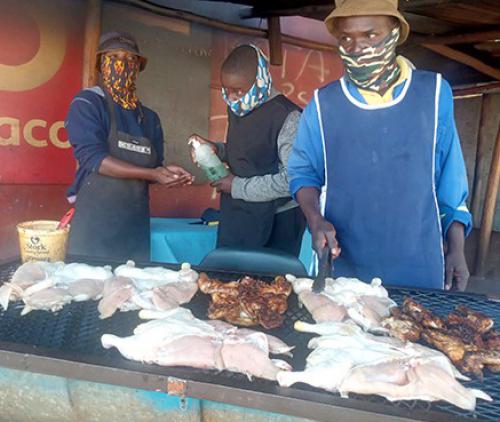 Rofhiwa Manezhe owns an eatery at Siloam CBD and says that he fears for his life every day but still has to make money in order to feed his children. In the photo, from left to right, are Akonaho Mamphaga, Mulanga Siobo and Rofhiwa Manenzhe. Photo: Maanda Bele.

More than 400 days have passed since South Africa went into its first lockdown because of the Covid-19 pandemic and the situation is putting a big strain on economic activities in areas such as Siloam in the Nzhelele district.

Small-business owners around the valley say they are working in fear of contracting the virus but have no choice because they have to put food on the table.

Rofhiwa Manenzhe, who owns an eatery in the centre of Siloam’s business area, said the latest statistics were shocking. “I fear for my life, but I have no choice. My kids have got to eat,” he said. Manenzhe said working with money was a challenge, because he did not know where the money had been.

Dakalo Netshivhodza, the owner of R523 Fast Food, a popular local restaurant, said that she was worried about the increase in Covid-19 cases in Nzhelele. “Some of the people who have the virus might be our customers, and when I serve them, I will contract the virus and spread it to other customers or at home to my family. I am really scared, but I have to go to work because, at the end of the day, I need money,” she said.

Tshimangadzo Muofhe, who owns a mini pharmacy in Siloam, said running a business was not easy. “People are hiding indoors, and business is kind of slow. This virus thing is killing us financially and physically.”

The small entrepreneurs are very realistic about the fact that the situation is not likely to change soon and that they will have to run their businesses with the threat of infections looming.

Secondary schools in the area such as Dzata Secondary are also affected by the increase in Covid-19 cases. The schools have all closed for an extended holiday period, waiting for the third wave of infections to subside. Dzata Secondary’s principal, Dr Livhalani Sinyosi, said that she was glad that all 13 of her educators who had been infected had now recovered.