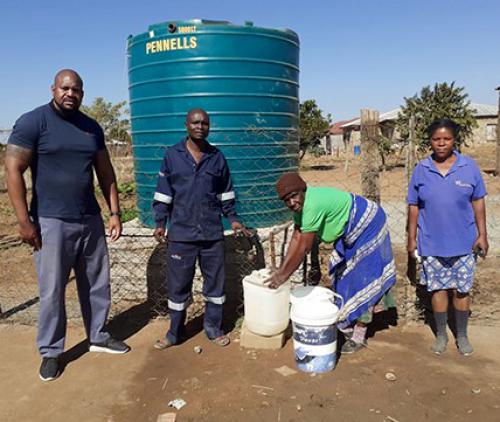 Tshiozwi gets its own water station

Residents of Tshiozwi Village received some reprieve from the severe lack of water they have been experiencing for so long, thanks to the Vhathu Ndi Mapfura Foundation, who saw to it that a water station was installed and made available for use by the community.

The director of Vhathu Ndi Mapfura Foundation, Musanda Vho-Makhado “Vhathundimapfura” Sinthumule, said that the foundation was on a mission to ensure that the community have access to basic necessities to relieve them from the pressures of life, caused by the lack of basic services.

“Water is a basic need, and the foundation understands very well that it is also our responsibility to team up with like-minded people and companies to make sure that our people get access to those needs,” he said.

Vhathundimapfura extended his gratitude to all those who had stepped in and assisted with contributions towards the realisation of the water station. Hydro Drill drilled the borehole, which was thereafter equipped by the foundation.

“We understand very well the needs of the community, more so during these hard and trying times of the Covid-19 pandemic, where water is essential,” said Hydro Drill’s representative, Mr Mukondeleli Muvhali.

The Vhathu Ndi Mapfura Foundation has been helping the community of Tshiozwi in terms of service delivery and have a positive track record in that regard. The first water station was made available to the residents of Tshiozwi’s “new stands” with proceeds from the Tshiozwi Annual Show, which débuted in August 2019. The show is hosted by the foundation and provides entertainment and other activities for the children, where it attracts hundreds of fun lovers in the Sinthumule/Kutama area and neighbouring villages.

“We hope to provide more water stations in other parts of Tshiozwi, so that all people eventually get access to water,” Vhathundimapfura said.

The two boreholes for communal water stations were drilled at two different households and the arrangement is that water users contribute R20 per household each month towards the electricity voucher to pump the water to keep the tank full and the water flowing.

“We put together the R20s (each household’s contribution) and bought an electricity voucher, which we then delivered to the house of the one in whose yard the borehole was drilled,” explained Vho-Kutama Ramunenyiwa (82). “I am so happy that an elderly [person] like me now can access water here nearby instead of pushing a wheelbarrow for over two kilometres to buy water in another part of the village.”