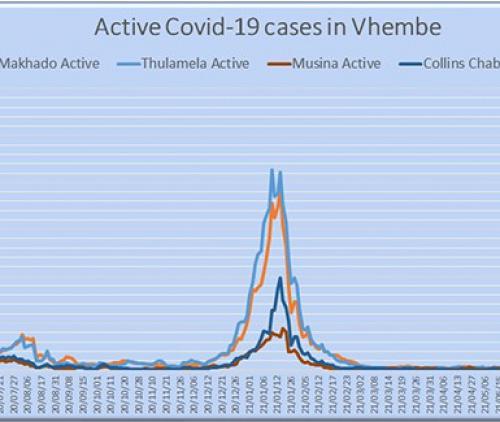 The third wave of Covid-19 infections has struck the Vhembe region, and this time around it has caused devastation. Apart from the sharp rise in the death toll, many businesses had to close and isolate the past week, or operate with a fraction of their normal staff component. The pandemic is also taking its toll on industries such as funeral businesses, where staff members not only face an increased workload, but are under severe emotional stress.

The latest available figures, as supplied by the Limpopo Department of Health, indicate that Vhembe had 2 171 active Covid cases on Wednesday, 14 July. Most of these are in the Makhado area (995) and in Thulamela (619). In Musina, 309 active cases occurred, and in the Collins Chabane municipal area the figure stood at 248. Many believe that these figures are not realistic and that the real figures are much higher.

The death toll has shown a dramatic increase the past two weeks. On 30 June, the Vhembe region reported 497 Covid-related deaths. This figure went to 592 on Wednesday.

The impact of the pandemic can clearly be seen in the funeral industry. The chairperson of the South African Funeral Practitioners Association (SAFPA), Mr Sam Ntshauba, said that ever since the pandemic had hit South Africa, their industry had been under immense pressure. He said that they now worked twice as much as they normally would. Ntshauba said that not just the workload, but also the emotional pressure was unprecedented. He explained that bodies arrive hourly, and shifts are being doubled. Following a death, a funeral must be held within three days.

“We can’t keep the bodies for two weeks, because they’d pile up. So, we need them to be going out as quickly as possible,” he explained. “Heavy demands are made, and these are felt by everyone in the business. It’s not only us who are inundated. Sometimes, when we get to a cemetery, there are not enough graves,” he said, adding that additional staff members were then required, and some were multi-tasking.

A local funeral undertaker, Mr Shudu Magwabeni of MTG Funerals, also complained about the constant pressure, saying that the staff members were battling to cope with the high number of burials they had to perform daily. He reckons that the pandemic has drastically transformed the death-care industry, with staff also fearing that they might contract the virus. Magwabeni pleaded with South Africans to take the necessary precautions to reduce the number of cases in the country. “It (the virus) is very different. It is something that you have never seen before,” he said.

The director of Marindi Funerals, Mr Kaizer Marindi, said that they were operating in a very stressful environment. “We are worried about the safety of our workers, because that comes first,” he said, adding that the job (of burying people) still had to be done. “Contrary to what some people may believe about the funeral industry, we are not happy when there is death. It’s a painful process. We’re not happy to say this is our time to shine. We’re pushing that people stay at home, stay safe and let’s reduce the number of deaths. Let’s flatten the curve,” said Marindi.

“It’s difficult to cope, because you are not sure if you’re going to contract it (the virus) or not. You have got families that you need to comfort. It’s very difficult to focus on your stress alone,” said Mr Rofhiwa Nedzamba of Cornerstone Funerals. He said that, prior to this pandemic, everyone had had their own role in the business, but now everyone had to assist where help was needed. “It is an emotionally taxing task of managing your own fears and consoling grieving relatives,” he said.

The effect of the pandemic is not restricted to certain areas of the Vhembe District. Even in more remote areas such as parts of Nzhelele, funeral undertakers must absorb the constant pressure.

Pfarelo Mathivha, who runs ISA Funeral Services, said as undertakers they faced a lot of challenges during this pandemic. “Sometimes we go to collect a body, not knowing that it is a Covid-related death,” she said. She believes this puts them even more at risk.

The past two weeks, the queues at vaccination centres have been growing steadily. The private sector has also joined the fight, although this did not seem to happen without teething problems.

At the Makhado Show Grounds, the teams started vaccinating people on 21 June. Initially, vaccination was only for people of 60 years and older, but the past week the 50-to-59-year-olds were also included in the programme.

During a visit on Monday (12th), the queues were snaking past the entrance. People stood in only one queue before entering the vaccination room. As they entered the room, two queues formed - one for the 60-year-olds and above, and the other one for the 50-to-59ers. Most people adhered to the Covid protocols, observing social distancing and wearing masks. The Makhado Show Grounds’ gates close at 14:00, whereafter the people left in the queues are attended to.

According to Ms Constance Raulinga. the Louis Trichardt Site Manager, the number of people visiting the site is increasing daily. She said that, in total, they had vaccinated 9 347 people at the site since it had opened. This number includes teachers.

At the Clicks pharmacy in the Makhado Crossing Mall, the process ran less smoothly. The pharmacy participates in the private sector’s efforts to alleviate the burden on the government. Phoning the store to try and find how the process works did not help much, as the phone operators had no idea what was going on. Some residents opted to visit the Clicks store to try and wait in line to get vaccinated.

One lady who visited the store on Monday was clearly very frustrated with the process followed and the lack of proper communication. “Clicks must really improve their services regarding the Covid-19 vaccination programme. I arrived there before 08:00, only to be attended to by 13:00,” she said. By 08:00 she was number 12 in the queue, but had to wait patiently for almost five hours to be vaccinated.