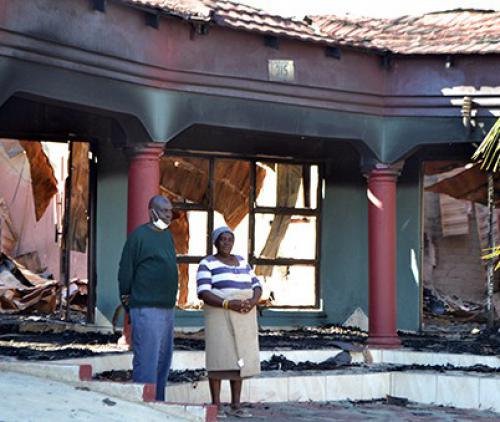 Mr Masala Munarini and his wife, Jeanette, stand in front of the ruins of their 12-room mansion in Ramukhuba Village. Photo: Silas Nduvheni.

A family from Ramukhuba Village in Vuwani’s dreams went up in smoke when their 12-room luxury house, and everything in it, burnt down in the early hours of Sunday, 4 July.

How the fire started, no-one knows. Ms Jeannette Munarini (51) said their elder child (27), who had slept in another house on the same premises, was woken by the light coming from the burning house across the yard that shone through his window. He told them that the fire was in the dining room of his father’s mansion. He ran to the burning house to alert the sleeping family and, fortunately, everybody managed to get out without serious injuries.

Limpopo police spokesperson Brigadier Motlafela Mojapelo confirmed the incident and said the police in Vuwani had opened an inquest to determine how the fire had started.

The family said they had phoned Vuwani Disaster Management several times, but by the time they had finally arrived, nothing could be done. The family stood and watched as the whole house was consumed in flames.

Munarini (51) told the media that her husband, Mr Masala Munarini (61), had worked as a soldier in the 15 South African Infantry (SAI) Battalion in Vuwani for many years. When his pension was paid out in 2019, they decided to invest in building a beautiful home that they could happily share with their children.

“We lost everything inside the house. Our neighbours help us with accommodation, food and even the clothes we are wearing. The children’s books, school uniform and other useful materials were all destroyed in the fire,” said Munarini. “We just thank God that everyone managed to escape the fire.”

Their son, Orifha, a Grade 10 learner at Kolokoshani Secondary, and a young boy sustained minor injuries when escaping from the fire.

According to Munarini, the damage caused by the fire is estimated to be over R1 million, and they keep asking themselves: “How did this happen?” Besides a few thousand rands of cash that was kept in the house, they also lost valuable documentation, such as their IDs and SASSA cards.