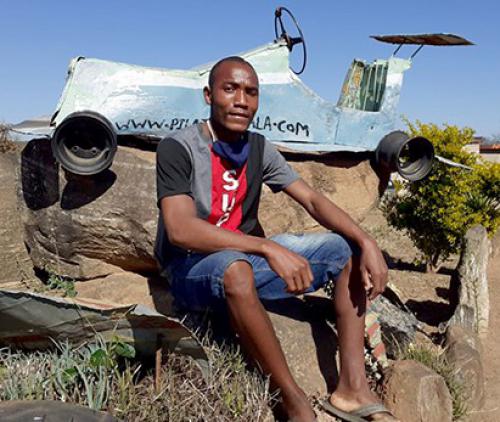 Pilato Bulala is fearing that he might find himself in trouble. Picture: Tshifhiwa Mukwevho

Pilato Bulala, a local artist famous for fashioning iron matter into enviable pieces of art, is fearing that he might find himself in trouble after scammers had created a fake Telegram account, using his contact numbers and names. The scammers are using his name to lure people into investing money in fraudulent “investment” schemes.

The problem of fake social media profiles is rife and is not limited to the cities. The scammers use the names of well-known personalities to try and add legitimacy to their messages. Whereas a lot of focus was placed on social media platforms such as Facebook in the past, instant messaging services such as WhatsApp and Telegram are now also being used.

Bulala said that he first became aware of the scamming activities when friends called him, asking him about his sudden activity on Telegram. They told him he was asking them to send him money which he would then invest. “I didn’t even know what Telegram was, and here there were people informing me that I had requested between R5 000 and R10 000 from them,” he said.

Upon further investigation, he discovered that the scammers were inviting people to send money, so that it could be invested with “Barry Silbert”. He did some research and found out that Barry Silbert is a very wealthy individual and the founder and CEO of Digital Currency Group (DCG), a conglomerate of five cryptocurrency-focused companies. Bulala said, however, that he doubted very much if any connection with Silbert existed. The scammers probably just use names such as that of Silbert to make things sound authentic.

Bulala said that the people who bought his artwork came from all over the country and even abroad. “Some of those people usually share my contacts and link me with more art fanatics, who usually communicate and contribute towards my livelihood in hard times like now during the Covid-19 pandemic.”

He suspects that the scam may have started about a month ago. At the time, he received a phone call from a lady who claimed to be residing in Cape Town. She told Bulala that she was interested in his art and that she wanted to help him access some donations that were meant to uplift artists such as him in these hard times.

“She said she needed to first register me in the database, so that many people from all over the world can see my name and then contribute to the cause,” he said. “She said I would get a code number on my phone within two minutes and that I should quickly forward such to her, which I did.”

After a few minutes, he was instructed to also supply them with an alternative contact number of someone close to him in case they cannot reach him on his number. He supplied the caller with the contact number of his wife. “Again, they requested me to send the code number which would shortly be sent to me, and I did exactly that,” Bulala said. “After the call, I was optimistic about the good things that would come my way as a result of the financial support I would get.”

He started planning that once he had received the funds, he would buy more working material and find four youths to mentor, so that he could contribute towards mentorship and job creation during these hard times. “I know of many youths who are out of school and not doing anything, so I thought I would recruit them and teach them to do art while I also pay them a small stipend for transport and snacks,” he said.

However, Bulala’s dreams ended abruptly when he started receiving messages on WhatsApp and calls telling him that he was trying to scam people via his Telegram account. His wife received similar messages. “I was so shocked, and I realised that the lady who called and requested code numbers from me was a scammer who wanted to drag my name into the quagmire.”

He then reported the matter to the Waterval Police Station, where he was informed that no case would be opened until the local head prosecutor had assessed the matter.

Bulala, who normally collects discarded cans, iron and other related debris and fashions them into art pieces, is one of the Ribolla Art Route’s artists. Ribolla Art Route is an entity that brought some artists together, so their art can get the publicity and attention it deserves, both online and physically at the spaces of the respective artist who are on the ‘route’.

Bulala had previously sold lots of his artefacts online, for already he had enjoyed the courtesy of visitors from Germany, England, Holland, and most African countries, who had all admired and bought some of his work, through the years.

“I am today informing the world about this kind of scam, so that they too do not fall victim to it,” he said. “I also wish for people out there to know that I am no scammer, that I would not invite them into any ‘money investments’. I am an artist, and I remain an artist.”