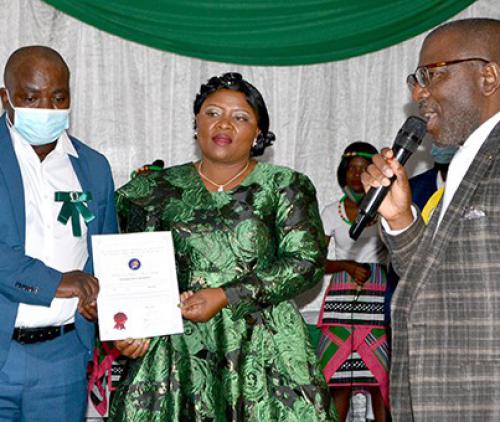 Absolute quiet fell over the congregation of the newly established Apostolic Faith Mission Word of Faith Church in the rural village of Malamangwa-Tshamutavha, just outside Thohoyandou, when Pastor Thivhavhudzi Nekhavhambe made her entrance on Saturday, 19 June.

Pastor Nekhavhambe, a devoted former member of the African Apostolic Faith Mission in Makwarela near Sibasa, said that she had a vision one day where God showed her that she would lead the people in a newly established, rural-based congregation. This was clearly her calling, so she approached the senior pastors at her church and asked them to give her formal training in church services and leadership, and there her work in the church began.

At the same time, a need for a proper church in Malamangwa-Tshamutavha indeed existed as services were held in a mere shack because they had to travel far to the nearest church, so she went to the traditional leader and asked him for land. When he gave her his approval for building a church in August 2019, she immediately set to work. Today, they have a newly established congregation, which has grown to more than 200 formal members, and Nekhavhambe has officially been ordained as pastor.

“I enjoy starting things from the ground because it allows me to work hard. I started the new congregation from scratch, and now we finally have a formal structure. We thank our great and mighty God, who showed me this vision,” Pastor Nekhavhambe said.

Pastor Jacob Tshikomba, Soutpansberg’s regional chairperson of the Apostolic Faith Mission Church, said he had faith that Pastor Nekhavhambe would put the people first as many would attend her church with the need for prayer and spiritual healing.

“Dream big about growing the church every day, even though it is only a rural-based church. Always pray for the people’s needs and problems, because prayers are the key to miracles and keep the demons away,” Pastor Tshikomba advised her.

Vhamusanda Mmbangiseni Malamangwa, the traditional leader of Malamangwa, expressed his delight at the new church as the village has never had a formal structure. “Community members used to travel as far as Sibasa and Thohoyandou to worship, but things have changed for the better now the new church has officially been completed,” he said.