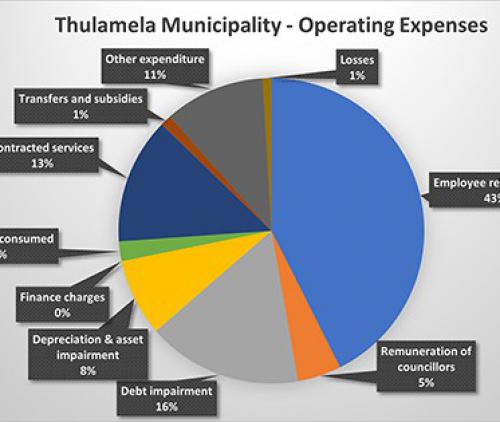 The Thulamela Municipality announced its budget for the 2021/22 financial year two weeks ago, but very little mention was made of increases and the real effects on the pockets of taxpayers. Mayor Avhashoni Tshifhango highlighted several of the capital projects, such as the completion of road projects and the building of low-level bridges. R18,6 million was also approved for the construction of the Tshilamba Art Centre.

Limpopo Mirror did, however, obtain a copy of the budget and analysed the relevant sections.

The bulk of Thulamela Municipality’s operating budget, as far as income is concerned, is under the heading “transfers – recognised”. This is funding that stems from grants to cover operational expenses. For the 2021/22 year, this is set at R531,69 million. The biggest amount (R495,78 million) comes from the Local Government Equitable Share grant.

In the previous year, Thulamela budgeted for an income of R94,3 million in property rates. The pre-audit outcome reflects that only R72,83 million was collected. The municipality increased the projection for such rates by 2,9% to R97,09 million.

The only service charge is for refuse removal, where Thulamela expects to collect R27,09 million. Landfill revenue is expected to boost this by R942 000 to R28,09 million. Last year, the municipality budgeted for an income of R34,45 million under this item, but the pre-audit figure only stood at R21,08 million.

The bulk of the operating expenditure goes towards the salary bill, which has now escalated to R322,65 million. This is 5,1% more than last year’s budgeted figure of R306,89 million. In 2017/18, the municipality’s salary bill stood at R240,87 million.

The political office bearers will cost the local taxpayers R35,05 million in the next year. This is slightly lower than last year’s budgeted amount (R36,96 million) but almost 25% higher than what the councillors cost in 2017/18 (R28,16 million).

The combined expense for employees and councillors represents 47,2% of the total expenditure. If the bill for contracted services is added, that means 60,6% of expenses are paid out to officials, councillors or contractors.

Council budgeted for a 1,2% staff increase, which brings the total to 604 officials and 81 councillors. The average salary for officials is expected to be R534 188 per year or R44 515 per month.

The rest of the expenses budgeted for are for:

The municipality’s capital projects were not listed in the budget and the only information available is what was mentioned during the mayor’s State of the Municipality address. Mayor Avhashoni Tshivhango mentioned the following projects:

The completion of the Makwarela Extension 3 Street project. A further R8,41 million was budgeted to complete the project. The overall cost amounts to R114,73 million.

The completion of phase three of the Tshilamba street project. R14 million is budgeted to complete the road, with the total cost escalating to R62,72 million.

The completion of the Mukumbani Access road. A further R28 million is budgeted for the project, bringing the total cost to R51,15 million.

The completion of phase one of the Thohoyandou J (Muledane) streets. Another R12 million is budgeted for this project, where the total cost will be R42,87 million.

The building of a bridge at Ha-Lambani. R2 million was budgeted for this project, with a total estimated cost of R26,26 million.

The building of a low-level bridge at Tshindongana Bashasha. The budget for this project is R16,5 millions in the next year, with an expected total cost of R23,74 million.

R18,6 million is budgeted for the construction of the Tshilamba Arts Centre. The total cost of the project is estimated at R29,36 million.

Upgrading of the Tshikombani testing station. For the next year, R6,7 million has been allocated to this project, with a total budget of R42,78 million.

R2,88 million was allocated towards the development of the Shayandima industrial area to alleviate pressure from Thohoyandou’s CBD.

The budget mentions total capital expenditure of R199,31 million. Of this amount, the municipality expects to finance it partly via internally generated funds (R91,77 million) and the remainder through allocations from national, provincial and district level.