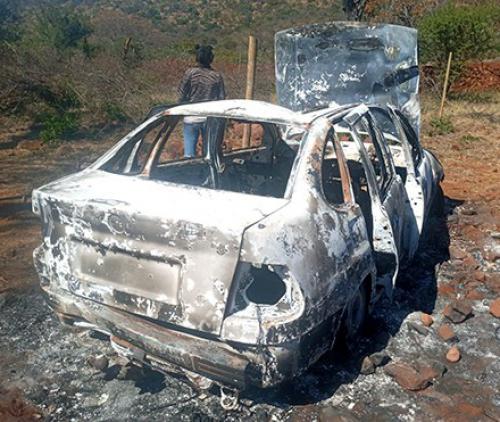 Community members of Mphaila village set the car of two suspects who had allegedly kidnapped, raped and attempted to murder a TVET College student on Sunday, 27 June, alight.

Two men appeared in the Dzanani Magistrate’s Court on Wednesday, 30 June, on charges of kidnapping and attempted murder after they had allegedly kidnapped a Vhembe TVET College student from her room, raped and stabbed her, and then attempted to dump her body in the bushes near Mphaila Village.

According to police spokesperson Brig Motlafela Mojapelo, the incident happened on Sunday, 27 June. The 21-year-old victim was in her rented room at Makwarela Location, when someone, believed to be her ex-boyfriend, allegedly showed up with his friend. The two men allegedly forced her into the boot of their vehicle and drove off to Mphaila village, which is a very remote and dense area. They stopped in the bushes, where one of the suspects allegedly raped the girl. Afterwards they stabbed her with a sharp object, and she lost consciousness.

Apparently thinking that their victim was dead, they carried her away and attempted to dump her in the bushes. However, a resident of Mphaila village saw the men carrying the unconscious victim and alerted other community members, who cornered the thugs and badly assaulted them. One of them managed to escape while the other was trapped in the car, which the angry residents set on fire, apparently using the petrol the thugs had intended to burn their victim with.

The man was saved by the timely arrival of the police. He was arrested and, along with the seriously injured victim, transported and admitted to Siloam Hospital. The 28-year-old suspect was placed under police guard.

The second suspect (25), who is alleged to be the victim’s ex-boyfriend, was arrested on 29 June after he handed himself over to the police. He will face an additional charge of rape. The outcome of Wednesday’s court hearing was not known at the time of our going to press.

The victim’s 45-year-old mother from Hamutsha Khwekhwe, who cannot be identified at this time, told the media that she still could not believe her daughter had so nearly been killed. She said she had not even recognised her daughter at the hospital as a result of the severe injuries she sustained during her ordeal. The victim apparently also had a serious wound to her head.

According to the mother, the two suspects clearly had their evil intentions planned carefully. They had apparently even bought a five-litre container of petrol, with which they intended to burn their victim there in the bushes after they had killed her, which they failed to do. Instead, she said, their car was burned down with it.

She said the suspects were boys she knew well. “I never thought they could be so evil. I don’t know how I will ever be able to look them or their families in the eye again. They must just rot in jail,” she said.

Mr Joshua Boko Simango, a member of the South African Youth Congress, was also at the scene and said he was very shocked. “These evil thugs drove many kilometres to come and do this. They even bought petrol to burn this innocent woman. This goes to show that women will continue to be victims if we don’t do something to stop it,” he said.

One of Mphaila village’s residents, who wanted to remain anonymous, told the media that the reason why the community had taken the law into their own hands was because they were fed up with the prevalence of crime in their village and what they called the police’s “incompetence” to curb it. “Our community is sick and tired of the police arresting criminals, and then releasing them again within weeks. All we want is a crime-free village, without the fear of being attacked by thugs,” he said.