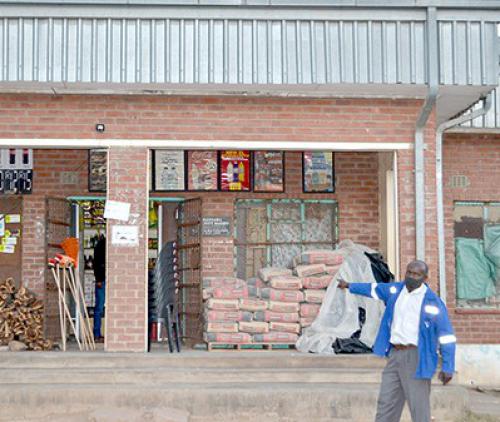 Tshandama Community Bakery’s former driver, Mr Hendrick Tshinanne Nevhutalu, shows the building where the women used to bake their bread for villagers and surrounding communities a decade ago. The facility is now used for various other business ventures. Photo: Silas Nduvheni.

A project started in 1996 to create employment in Tshandama village in the Mutale area has now become a hot potato for the people involved as well as the local leadership. The project has become dormant, and the local leader decided to make the premises that they had utilized available to other people.

A group of about 10 unemployed people started the Tshandama Community Bakery in 1996. The initiative was practical and profitable; they would bake bread to be sold in the village and surrounding communities.

The group leader, Ms Lydia Malindi, said that life started to improve considerably for them when they received funding of R250 000 from the Office of the Premier in 1997. With their bread-baking production fully functional, they were able to purchase a vehicle for delivering bread orders to their customers. They even hired a driver at that time, thus contributing by way of job creation within the Tshandama community.

“We were also funded for some baking machines from Eskom, and our project grew from strength to strength. We had customers placing orders from as far as Tshamulungwi and Matavhela,” she said. “But as we were not taught the finer aspects of financial and project management, there had been some misuse of funds from our members. Production started to decrease, and the project finally collapsed in 2010.”

In 2011, they were called in to the local traditional leader’s kraal in Tshandama and were asked to explain what had caused the bread-baking project to fail. They admitted to the council that many of their members lacked financial and project management skills, and that they needed better training in this regard.

“But instead of helping us to solve the problem, the Tshandama Royal Council merely took away our project, leaving us and our families to starve,” Malindi said.

In 2012, the bakery’s buildings were let out to other business owners. One of them opened a general supermarket and others started businesses providing, among others, stationery and Internet services.

According to Malindi, they have been engaging with the traditional leader of Tshandama village, Vhamusanda Nthetsheleseni Netshandama, for the past 10 years to get their bakery off the ground again, but have continually been sent from pillar to post.

Netshandama explained that they could not leave the buildings unutilized after the bakery failed, as vandalism is too big a problem in the village. “We let the buildings out to some businesspeople who were serious about offering needed services the village never had, so that the people didn’t have to travel so far anymore to buy groceries and other necessities. We are far from Tshilamba Township where school learners and communities have access to things like Internet and photocopy machines. Now those things are situated at the new buildings in that yard, which were not utilised before,” Vhamusanda Netshandama said.