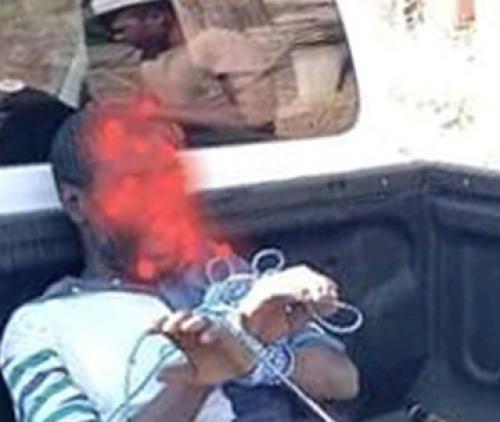 A man, who was caught stealing cables at Tshimbupfe outside Vuvani, was let off the hook a second time after the owner decided not to press charges. Photo supplied.

Two weeks ago, a man was caught red-handed by community members while he was stealing cables and music equipment at a church in Tshimbupfe outside Vuwani. He wrapped his loot in a cloth, which he had stolen from the church too.

While they waited for the police to arrive, a relative of the man, who is also feared in the community, wrested him away and no charges were laid after the pastor decided against it.

On Thursday, 24 June, the man stole cables again at Vuwani, which led the community policing forum (CPF) to investigate the matter.

Bishop Tshishonga, the CPF’s chairperson in all 13 villages at Tshimbupfe, said that, upon receiving information about the theft, they had followed footprints from a nearby donga. “We found the spoor where he had burnt the stolen cables, but he was not there. We enquired from residents living nearby, who told us his identity,” Tshishonga said. “We continued searching and were led to a local scrap-metal dealer, who confirmed that the man went there with cables, and showed them to us. He also told us that the man had not yet paid him and was at a nearby shebeen, drinking sorghum beer. We found him enjoying his drink with friends, and we called the police. He was taken away. But we are very disappointed as the owner of the cables decided not to lay charges against him, and he got away again.”

Tshishonga said they were worried that the man would continue this theft, knowing that he would not be arrested.

Tshimbupfe Mavhulana Civic chairperson Mr Frank Ndou said they were very worried about the challenge they were faced with. “Last Monday (21 June), six families fell victim to cut cables. We call upon our residents to please report and press charges, in order to stop these thefts,” he said.